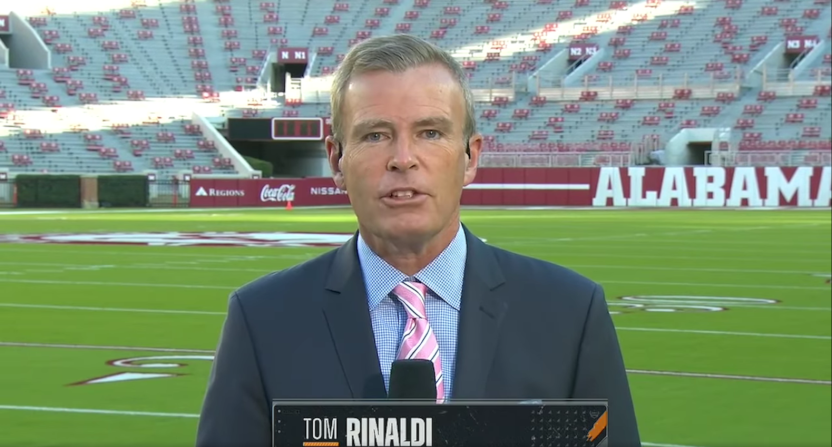 Another established ESPN rating goes to Fox. There have been many moves in that direction over the years, from Skip Bayless and Colin Cowherd through Marcellus Wiley through Adam Amin, Emmanuel Acho and Jonathan Vilma (the last three of which are coming this year). The latest move is Tom Rinaldi, known for his features on ESPNs College GameDay and other NCAA coverage (including conducting the first in-depth national interviews with Art Briles and Urban Meyer following scandals in 2015 and 2018) and other properties (including golf, where he recorded the network’s first interview with Tiger Woods after a car accident in 2010). According to Andrew Marchand of The New York PostRinaldi is now on his way to Fox, and will be appearing on many of their various sports properties:

Tom Rinaldi, one of ESPN’s top on-air reporters, is leaving for Fox, where he is expected to perform at all of his major events, from the Super Bowl to the World Series to the World Cup and college football, according to sources.

It’s interesting to note that since Rinaldi has been associated with ESPN for so long; he had been there since 2002 and joined them after a stint at the CNN / SI joint venture. And Rinaldi’s exit will certainly be noticed at ESPN’s college football (where Fox recently expanded Big Noon Kickoff has tried to compete with College GameDay over the years) and golf coverage in particular. It’s noteworthy to see him expanding his role into other sports as well, including MLB, the NFL, and soccer. We’ll see how this move works out for him and Fox.

[The New York Post; Rinaldi photo from an ESPN clip from October 2020]