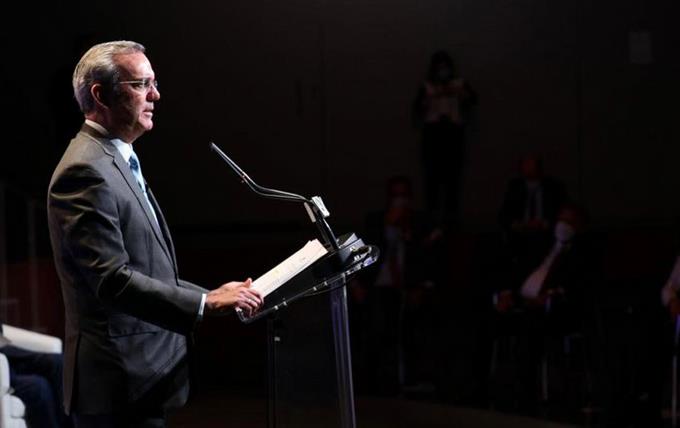 President Luis Abinader met with the King of Spain, Felipe VI, at the Royal Palace of El Pardo yesterday and discussed the issues of vaccination, the global economic crisis and bilateral relations.

In terms of vaccination, in order to defeat the coronavirus, both the king and the Dominican president agreed to draw attention to the difficulties poor countries face in obtaining vaccines to protect their populations.

Regarding the global economic crisis, they also agreed that the coronavirus has been the main enemy for investment, job losses, tourism and manufacturing in general.

Still, President Abinader and King Felipe VI decided to join forces so that Spain and the Dominican Republic strengthen their bilateral relations.

Visit to the king

The President went to the Royal Palace accompanied by the Spanish side, the Secretary of State for Latin America and the Caribbean, Cristina Gallach, and the Spanish Ambassador to the Dominican Republic, Alejandro Abellán.

On the Dominican side, the Minister of Foreign Relations, Roberto Álvarez; the ambassador to Spain, Juan Bolívar Díaz; the Protocol Director of the Ministry of Foreign Affairs, Francisco Cantizano; Lourdes Herrera and Eilyn Beltrán, aides to the President.

The king received Abinader on the occasion of his visit to Spain for the XXVII Ibero-American summit of heads of state and government in Andorra.

The arrival of the Dominican president in Andorra is scheduled for next Tuesday, in the company of the president of Guatemala, Alejandro Gianmattei, who will arrive with the king, who invited them to take off on his plane.

President of the government

President Abinader was also received yesterday by the President of the Government of Spain, Pedro Sánchez, at the Palacio de la Moncloa, as part of his official visit.

The President arrived at the Spanish government headquarters at 12:30 local time, accompanied by the Minister of Foreign Relations, Roberto Álvarez; the Dominican Ambassador to Spain, Juan Bolívar Díaz, and the Director of ProDominicana, Biviana Riveiro.

“We are talking about vaccination and recovery after the pandemic and about cooperation between our countries. We share a close bilateral relationship in many sectors that we want to continue to strengthen, ”said President Sánchez on his Twitter account after the meeting.

Before visiting President Sánchez, the Dominican ruler met with important Spanish businessmen, who have made major investments in the Dominican Republic.

Abinader said his government will always be open and willing to support anything that creates jobs in the Dominican Republic to improve the people’s quality of life.

Held at Casas de las Américas headquarters, this meeting was designed for Spanish entrepreneurs to demonstrate their willingness to continue to invest in the country.

Spanish investors expressed confidence in the attitude that the president has shown from the outset in favor of investment and job creation.

Abinader predicted that the country’s economic recovery will most likely be above the Latin American average, the world average.

The president spoke while taking part in an interview conducted by the journalist and president of the EFE agency, Gabriela Cañas, at the Tribuna EFE Casa de América program.

Abinader expressed optimism that the tourism industry, which is still at pre-Covid levels, will gradually change to return to normal by the end of this year.

He stressed that the Dominican Republic is on the way to a real economic recovery, citing as an example that in Punta Cana, with the hotel sector, producer markets are being created so that the same producers can sell directly to the hotels and avoid expensive middlemen.

He stressed that his government promotes transparency and promotes the fight against corruption and the elimination of impunity. “I’m in politics to help the country, out of a passion for public service,” he said.

KNOWING MORE
Covid vaccination. Referring to the vaccination process, he stressed that the country may have achieved the best levels of vaccination, not only in Latin America but worldwide, in relation to the population.

Invest in the land.

Abinader yesterday listed the many business opportunities in the country to Spanish businessmen and became the first investment destination in the Caribbean. He spoke at the second business meeting at Casa América’s Gabriela Mistral Amphitheater.

The Dilemma With Haiti

President Luis Abinader yesterday believed that the international community should bear greater responsibility for the situation of political and social instability in Haiti, and denied that building a border wall is part of an immigration policy.

Abinader explained that that country is going through times of great social irritation and that the Dominican Republic is taking steps to ensure security.

“The technology area perimeter fence will greatly help Haiti in terms of customs revenues, which currently lacks a great deal of control,” he said.

He argued that the Dominican Republic has good relations with all Haitian sectors and is willing, without participating, to promote an atmosphere of reconciliation and that arbitration will be conducted as has been spoken bilaterally with European leaders so that they can participate. “But the international community cannot leave us alone on the Haitian issue,” said Abinader.