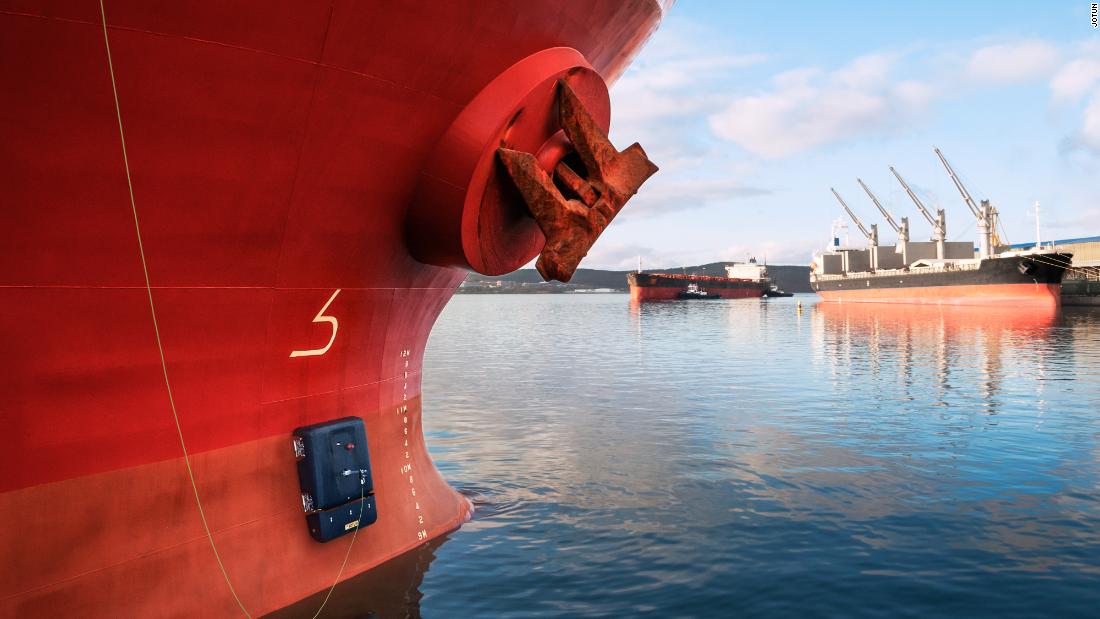 (CNN) – When a ship travels through the sea, barnacles, mussels, algae and other organisms stick to the hull of the ship. This process is called biofouling – and it is a major problem for shipping.

Biofouling increases the air resistance of ships, so more energy is needed to power them, increasing fuel costs and increasing their carbon emissions.

The build-up of marine life can also lead to non-native, invasive species being introduced to new environments. This could cause irreversible damage as these species become dominant in their new habitats and disrupt biodiversity – an issue that the IMO calls “one of the greatest threats to the world’s freshwater, coastal and marine ecosystems”.

To combat biofouling, technologies such as special coatings on ships and cleaning led by teams of divers are commonplace. But the Norwegian Jotun has a different approach.

The HullSkater, shown here, is a robot that removes biofouling.

Jotun has developed the HullSkater, a 200 kilogram (440 pound) magnetic crawler robot that removes the early stages of pollution. It is remotely controlled by operators in Norway, who use a 4G connection and the robot’s four high-definition cameras to inspect the surface, before using the brush to remove the first signs of build-up.

By cleaning biofouling at an early stage, “we get rid of it before it becomes a problem,” explains Geir Axel Oftedahl, director of business development at Jotun.

Depending on the size of the vessel, Oftedahl says the inspection and cleaning with the HullSkater takes about four hours and is done eight to 16 times a year. The robot is kept on board the ship and can be deployed when the ship is stationary and has a data connection, he added.

Biofouling is the build-up of marine life such as barnacles, mussels, algae and other organisms. Shown here is a “slime” on the hull of this ship.

Jotun has also developed a special coating that is painted on the ship to work with the HullSkater’s brush, Oftedahl says. This increases the effectiveness of the technology and reduces the risk of too much of the ship’s surface being eroded during cleaning, allowing chemicals to leak into the sea, he says.

Jotun says it is the first company to combine a robot, management and a coating to ensure the hull is always clean.

According to Geoffrey Swain, director of the Center for Corrosion and Biofouling Control at the Florida Institute of Technology, there are challenges in managing antifouling technologies as different movements and locations activate coatings in different ways. But he says robotics is “the best technology we have yet.”

Swain says the concept of proactive hull cleaning was first funded in 2005 by the US Office of Naval Research to add an additional strategy to anti-fouling coatings. However, he says coating management packages – such as the one offered by Jotun – are a new response to increased IMO biofouling regulations.

“If you take a ship to Australia or New Zealand, you will be inspected, so it’s better to be proactive,” says Swain. “It ensures that shipowners, or even charterers, now come in and really focus on how they handle the coating of the hull.”

According to the IMO about 9% of a ship’s fuel consumption is due to biofouling. In 2018, it outlined a strategy to reduce the carbon intensity of international shipping, with the goal of reducing industry carbon emissions by at least 40% by 2030 compared to 2008.

The HullSkater uses four high-definition cameras to inspect the surface and the brush to remove the first signs of build-up.

The IMO estimates that managing biofouling could result in a reduction of about 80 to 90 million tons of carbon dioxide emitted across the global fleet per year – the equivalent in CO2 emissions of some entire countries, including Greece or Nigeria, it says .

The HullSkater, which took more than four years to develop, was designed to decarbonise the marine industry. Jotun claims that every $ 1 invested in its technology – including the coating, robot and offshore monitoring – will save more than $ 3 in fuel costs.

So far, the company is well on the way to bringing its invention to market: manufacturing and supplying 50 ships, Oftedahl says.

After unveiling the HullSkater at a virtual event in March, it signed its first commercial contract with Swiss-Italian container shipping company Mediterranean Shipping Company (MSC); later this year, the robot will be installed on one of MSC’s larger ships at the Chinese shipyard in Guangzhou.

“Clean hulls are only part of the puzzle when it comes to delivering a more sustainable shipping industry,” said Giuseppe Gargiulo, assistant manager at MSC. “But still a central piece.”