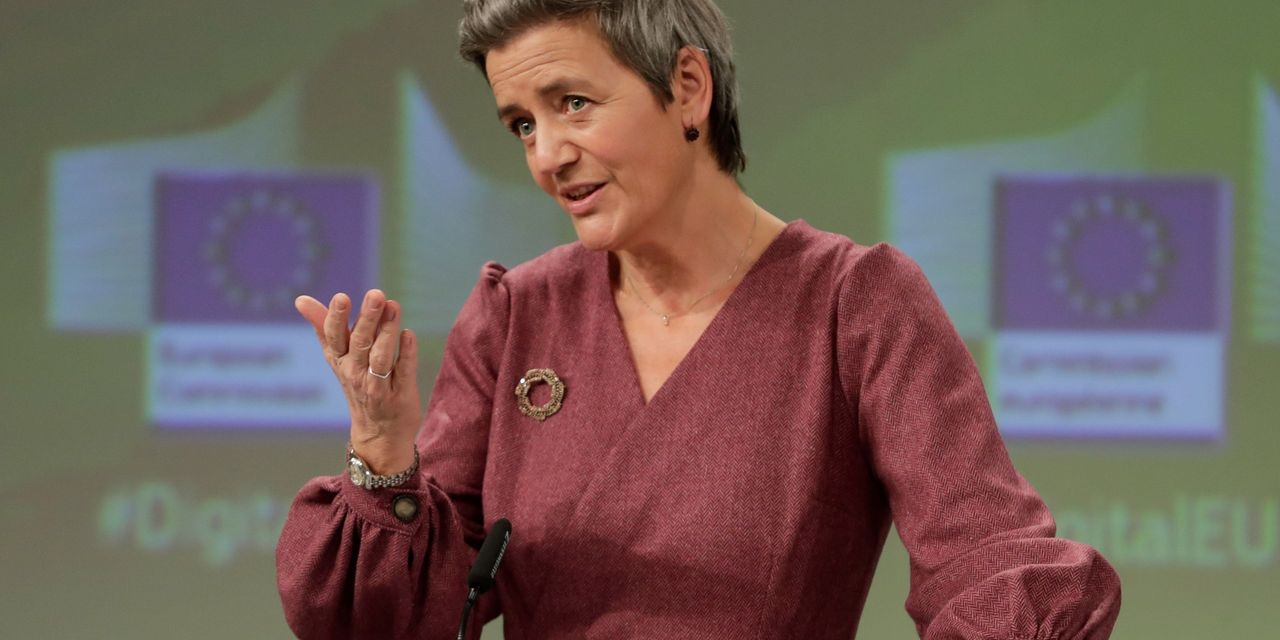 backed by threats of multi-billion dollar fines in an effort to expand their role as global tech enforcers.

The executive of the European Union on Tuesday proposed two bills – one targeting illegal content, the other anti-competitive behavior – that would allow regulators to fine up to 6% or 10% of annual global revenues in some cases or break up large technology companies for certain stop competition abuse.

The accounts do not list a specific company, but, as prepared, one or both would likely apply to several major US tech companies, including Alphabet Inc.’s

Notes on the news

Today’s headlines, news in context and good articles you may have missed, featuring Tyler Blint-Welsh.

At the same time, the UK, which has left the bloc, said on Tuesday that it is developing similar legislation for what it calls Online Harms. It would create a duty of care that obliges social media companies and search engines to take measures to prevent a range of illegal or potentially harmful material from being distributed on their platforms, or face fines of up to 10% of annual global revenues.

That’s because the UK is also pursuing new competition rules for dominant online platforms, including powers for a new digital markets unit of its competition regulator to suspend, block or reverse decisions made by technology giants, and impose fines in case of failure. compliance.

Together, the two lines of legislation represent the largest potential extension of global technical regulation in years. They aim to update decades-old laws that have largely protected technology companies from liability for what their users do online. They would also create a new set of competition rules for a group of digital giants accused of using their control of digital markets to anchor their own positions and knock out competitors.

The EU’s few proposals will now begin months or years of negotiating their scope and details, similar to the four years of debate before the EU passed the bloc’s privacy law, General Data Protection Regulation, or GDPR in 2016 in 2016. Any bill must be approved by both the European Council, which represents the bloc’s 27 national governments, and the directly elected European Parliament to become law.

Tech companies reacted cautiously to the new proposals, which could still be reformed or scrapped. Some have previously warned against creating a new set of competition rules that could hinder innovation, or onerous content moderation obligations that could lead companies to remove legal content, thereby suppressing free speech.

But Facebook, which on Tuesday complained about strict content moderation rules in Germany, said it welcomed the harmonization of EU rules in this area. The proposals “are on track to help preserve the good things about the Internet,” Facebook said

An Amazon spokesperson declined to comment, but pointed to a blog post in which the company said the block should ensure that “the same rules apply to all companies.”

“We hope that future negotiations will try to make the EU a leader in digital innovation, not just digital regulation,” said Christian Borggreen, vice president and head of the Brussels office at the Computer & Communications Industry Association, representing Amazon, among others. , Facebook and Google.

A win for technology companies and their lobbyists is that the EU proposal keeps intact – at least for now – the fundamental liability shield that protects digital intermediaries from responsibility for the content of their services and from their good faith efforts to address problems. But the proposals are increasingly adding obligations for online intermediaries, based on their role in the digital ecosystem and their number of customers.

The European legislative proposals counterbalance similar discussions in the US, where the Internet industry’s similar liability shield – section 230 of the Communications Decency Act – is about to be revised. But prospects for a review of competition law in Washington remain unclear. In October, a Democrat-led panel in the House of Representatives proposed several legislative changes to rein in the power of major technology platforms.

One of two proposed EU bills, the Digital Services Act, would require major technology platforms reaching more than 10% of the EU population to actively seek out and mitigate risks from illegal content and goods available through their services to be. It requires annual external audits and imposes new transparency requirements on users and regulators.

Major platforms could be ordered to change their behavior after such audits, and if they don’t comply they could face significant fines – with a higher cap than the EU’s GDPR privacy law.

The Digital Services Act would also empower regulators to enforce local laws on illegal content. For example, a city that requires rental properties to be registered could order a home-sharing app to remove a listing for an unregistered property, or request information about a landlord who doesn’t pay taxes, an EU official said. a presentation about the law.

The other EU bill, the Digital Markets Act, would preventively block companies with a large number of business customers and consumers from a blacklist of measures considered to be anti-competitive, such as requiring a company seeking access to one core platform service to subscribe or pay for any other such service. The law would also create other obligations towards smaller businesses and end users, such as providing price transparency for online advertisers and allowing data portability for end users.

Lobbyists prepare to fight over the bills.

The Internet Society, a nonprofit promoting the open Internet, said it was concerned that the proposals, if passed, could help break the Internet that divides places with different rules, senior director Konstantinos Komaitis said.

But some other groups say more regulation for big tech companies is too late. Raegan MacDonald, chief of public policy at Mozilla, the nonprofit behind the Firefox web browser, said she supports new transparency provisions around online advertising for internet users in the content bill.

“Competition investigations can be too slow to prevent irreparable damage to the market,” said Monique Goyens, group director general. “It is the right move to ban some exercises in the front rather than picking up the pieces afterwards.”

—Stu Woo contributed to this article.