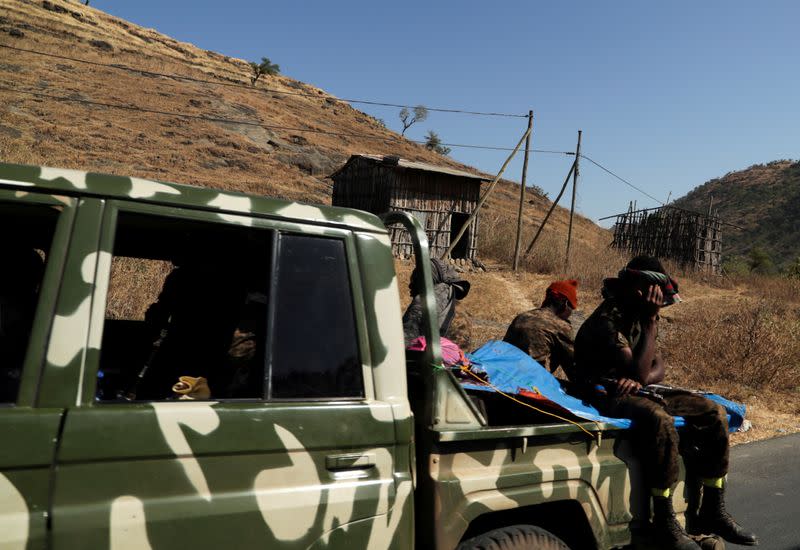 ADDIS ABABA (Reuters) – According to two soldiers who were caught in what they described as a daytime siege.

According to the two men, troops still loyal to Tigray’s former ruling party, the Tigray People’s Liberation Front (TPLF), surrounded the Sero base near the northern border with Eritrea. Within days, food and water were running low, forcing the people inside to ration, they said.

They said the siege peaked on Day 10 when TPLF reinforcements arrived with tanks, anti-aircraft guns and mortars to try to capture the base. They described a six-hour barrage in which some soldiers tried to escape from the back of the compound, but were captured.

“Even after we surrendered, they stabbed one of our members for no reason,” said one of the soldiers, Mater Ambaye. He said he saw the bodies of 15 comrades, some with cuts, others shot.

The description given to Reuters by Takele and Molla Kassa, another soldier, supports government reports on how the conflict started. It is also consistent with the details given by a senior military officer at a press conference broadcast by state television on Nov. 10.

However, the TPLF denies that the conflict started.

“We have not launched any attacks,” the group’s leader, Debretsion Gebremichael, told Reuters in a text last month, although he said some soldiers “joined us by refusing. [the] federal treatment for Tigray. “

Reuters has not been able to reach TPLF officials for further comment.

Reuters was also unable to independently verify the accounts of the two soldiers, as communication with that part of Tigray has been cut and the government is restricting access to the region. Government and military officials did not respond to requests for comment.

The government says its troops are now in control of major cities and towns, and a new transitional administration is working to restore order in Tigray.

But the experiences reported by Molla and Takele help explain why there is still bitter division.

“The cruelest thing is that I stayed there for 21 years (in Tigray). I stayed there longer than with my own mother who raised me,” Molla said. “What kind of animals are they?”

Reuters spoke to Molla and Takele by phone this month, before an army spokesman announced a ban on soldiers from speaking to the media. The men said the TPLF detained them in various locations after their surrender before they were released from Sero along with about 200 other soldiers and eventually reached the town of Sekota in the neighboring Amhara region.

Government officials have told Reuters that the TPLF has transported thousands of captured soldiers to the Amhara border and released them. The officials did not indicate whether any soldiers from Sero were present. Other soldiers were freed by federal troops as they advanced to the regional capital of Mekelle, the government said.

The fighters included members of the national defense force, who killed fellow soldiers in their beds and confiscated their weapons, Redwan Hussein, spokesman for the government’s emergency task force in Tigray, previously told Reuters.

At the Nov. 10 press conference, Lieutenant General Bacha Debele said radio communications were interrupted at 10 p.m. on Nov. 3 at military bases across Tigray. The next day, he said, a group of senior officers were kidnapped from a regular dinner with Tigrayan officials, while soldiers were surrounded in other places.

“Many died on both sides,” he said without providing any evidence. “They buried their militia while stripping the bodies of our soldiers of their uniforms and leaving them under the scorching sun … the dead were left to be devoured by vultures.”

Molla and Takele said the Sero base, where 250-300 government troops were stationed, was fired at around 5 a.m. on the morning of November 4. Initially, the attackers withdrew when government soldiers fired back, they said.

They said they asked local residents who was behind the attack and that they were told by a TPLF official that army commanders had agreed to surrender their weapons to the TPLF and that soldiers within the base should comply.

“We said we had never received such orders from above and told them we would not give up the weapons. The weapons belong to the nation,” Molla said.

In the ensuing siege, while TPLF troops surrounded the base, those in attendance rationed food into one meal in the afternoon to conserve supplies, but after eight days the base ran out of food, they said.

“They ate us like a cat eats its child after giving birth,” Molla said.

The two soldiers said the betrayal by former comrades had heightened their desire to avenge their comrades and capture the fugitive TPLF leadership.

“We couldn’t even bury our friends and brothers. They kept us from burying them, ”Mater said. “I want to join my friends and fight.”

(Reporting by the Addis Ababa editors; edited by Alexandra Zavis and Nick Tattersall)