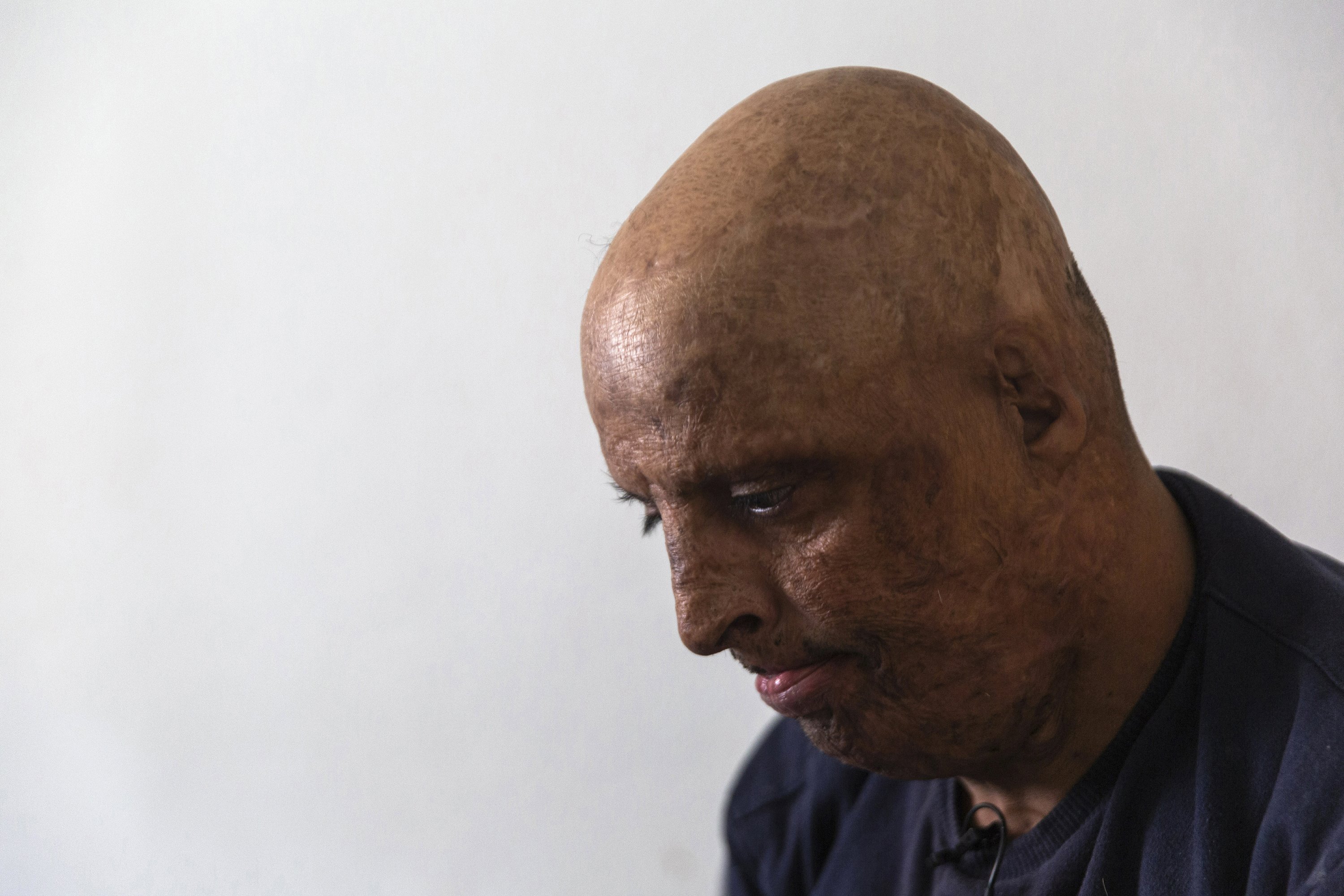 KASSERINE, Tunisia (AP) – In his old life, Hosni Kalaia remembers confidently strolling the streets of his hometown Kasserine in central Tunisia. He flashed his heavy gold bracelets and rings and blew out his chest, broad and sculpted by regular workouts.

Today, Kalaia hides his face from the world behind dark sunglasses and under a woolen hat. On his left hand, three blackened, gnarled fingers protrude from one glove; on his right side he has none at all.

He lost them in the seconds it took to disfigure his life forever, when Kalaia – angry and distraught over the abuse and injustice he had suffered at the hands of a local police chief – dipped himself in gasoline and set himself on fire. .

He is one of hundreds of Tunisians who have committed the desperate act of self-immolation over the past 10 years, following the example of Mohammed Bouazizi, a 26-year-old fruit seller in the city of Sidi Bouzid who set himself on fire on December 30. 17, 2010, to protest police harassment.

Bouazizi’s gruesome death unintentionally unleashed mass demonstrations against poverty and oppression, leading to the downfall of the 23-year-old Tunisian dictator. That, in turn, led to the uprisings of the Arab Spring and a decade of crackdown and civil wars across the region.

“I would never describe the act of self-immolation as an act of courage because even the bravest person in the world could not do it,” Kalaia, 49, told The Associated Press in his childhood home. “When I poured the gasoline over my head, I didn’t think much because I wasn’t really aware of what I was doing. Then I saw a flash, I felt my skin start to burn and I fell down. I woke up in the hospital eight months later. “

He says it hasn’t gotten any easier to see the terror on people’s faces when he takes off his hat and sunglasses. Scarred rivulets fray and splinter across his face and disfigured ears, and there are raging, deep welts on his arms and stomach.

His younger brother also set himself on fire by committing suicide, and his mother tried to do the same. Their family is a reminder of the chaos and economic turmoil in this North African country.

The dreams of the protesters have been shattered almost everywhere in the Arab world. Tunisia is often considered a success story, and a Tunisian democracy group won the Nobel Peace Prize in 2015, but while it has more civil liberties, freedom of speech and political plurality, the country is plagued by an ever-worsening economic crisis.

A lack of socio-economic reforms, the devaluation of the Tunisian dinar and weak, inefficient governance have not alleviated poverty or completely revitalized investment. Amid the COVID-19 pandemic, the unemployment rate has risen to 18%. Attempts to migrate to Europe by sea have skyrocketed.

“There is a huge gap between people’s ambitions and their resources. It is this divide that pushes people further into misery, ”said Abdessater Sahbani, a sociologist at the University of Tunis. “You can have a good job and be well educated, but it doesn’t get you anything substantial.”

Self-immolations have tripled since 2011 and “the increase will continue into 2020,” said Dr. Mehdi Ben Khelil of the Charles Nicolle Hospital in Tunis, who is studying the phenomenon.

After the revolution, said Ben Khelil, “there was a contrast between what we hoped for and what we gained. Disillusionment continued to grow. “

Although there are no official statistics, the Tunisian Social Observatory of the Tunisian Forum on Economic and Social Rights recorded 62 such suicides or attempts in the first 10 months of 2020.

Most occur near local councils or government buildings to protest financial uncertainty and suffering, said Najla Arfa, project manager at the observatory. Abuse by the police is often a trigger.

The vast majority are working-class men in their 20s and 30s, living in disadvantaged neighborhoods such as Kairouan and Sidi Bouzid. Of the 13 survivors AP contacted, all said they needed financial assistance.

In the decade since Bouazizi’s suicide, little has changed in his hometown of Sidi Bouzid. Hordes of unemployed young men are chain-smoking on plastic chairs in cafes. Others are lining up to buy gas cylinders after a strike has disrupted supplies and forced people to use firewood.

With monuments in his memory, the city has become a sanctuary to Bouazizi, whose life resembles that of millions of other Tunisians. But not everyone views their legacy positively.

“His act had a negative effect on the whole country and especially on Sidi Bouzid,” said 30-year-old accounting assistant Marwa Hamdouni. ‘I think only his family benefited. But for the government of Sidi Bouzid, the revolution has brought nothing good. “

In 2013, Bouazizi’s family moved to Montreal. Experts say stories of his family benefiting financially from his death spawned other such suicides, particularly right after the revolution.

Ben Khelil, the doctor, says the reasons go on: “Behind the burn is the desire to express their words and suffering. For some people, the desire is not to die but to be heard. “

“Some scars may not heal well and can interfere with functions such as sitting, chewing and expressing facial emotions,” says Ben Khelil. “There can be a lot of persistent pain, especially if the scars are deep and touch the nerves.”

Kalaia spent three years in a hospital and then in a private clinic recovering from his burns. He can’t hold a bottle of water, get dressed unaided, or fall asleep without medication. His arms are still riddled with infections.

“I’m not going to tell you that I regret waking up, but dying would have been better,” says Kalaia, dragging a cigarette. “Today I don’t think about killing myself again, but I ask God for death because I’m so tired.”

The Quran prohibits suicide, and many Muslim communities consider it a taboo. This does not prevent hundreds of Tunisians from trying every year.

In 2014, Kalaia’s mother, Zina Sehi, now 68, tried to burn herself to death in front of the president’s palace in Tunis, in protest at the government’s lack of support for the family. The following year, his 35-year-old brother Saber did the same and died instantly. Kalaia blames herself for their actions.

The government set up a commission in 2015 to prevent such suicides, but political turmoil has spawned a series of short-term governments that have taken little drastic action to help survivors or their families.

See what this state has done for me? It’s the state that left me in this corner, ‘says Kalaia, gesturing to a mattress on the floor of his house where he sleeps. “It’s over, my life is over.”