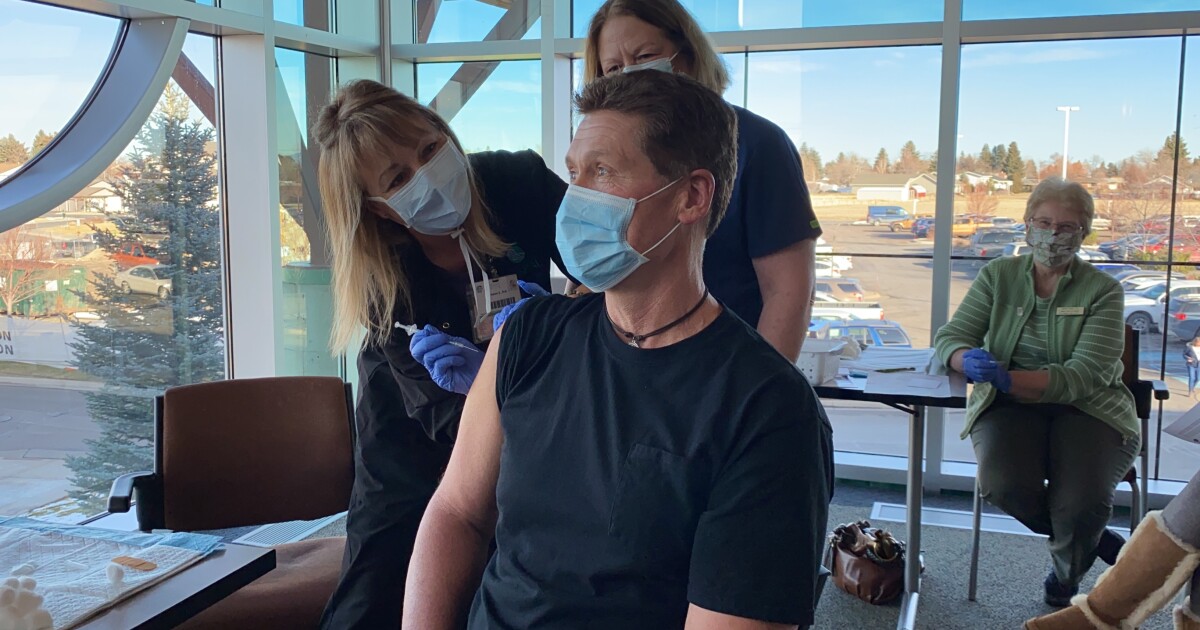 GREAT RELIPS – On Wednesday afternoon, several people were the first to receive the COVID vaccine in Great Falls.

It happened at Great Falls Clinic Hospital. The first dose was received by Tim Street, a resident physician, and administered by Karen Slotness, a nurse in the COVID unit / Inpatient Department. “Tell me when you’re going to do it,” Tim joked right after he got the picture. There was a moment of laughter and applause. It was a moment when millions of people had been hoping and looking forward for months.

Street was followed by several other Great Falls Clinic staff; the clinic created a Facebook photo album, saying, “This album is dedicated to the Great Falls Clinic employees and suppliers who have asked to show their support for the vaccine!”

“Yes, I hope so too”, agreed Brehanne Kluge. “I hope this makes a difference.”

“It’s just another shot in the arm,” said clinic nurse Kim Haselden. “Hopefully one that will stop this.”

I spoke to Vic and Brehanne after they got their vaccine. I asked them how the injection felt compared to a normal flu shot. “Not much else,” said Brehanne. “I don’t really think I felt anything.”

Both also said they hope people will get the vaccine when it becomes more widely available to the general public within a few months – if not for their own good, then to other people. ‘It’s to save lives, you know? It’s not just about you, ”Kluge explained. “It’s about everyone.”

Bonilla compared it to vaccines against polio and other viruses. He marveled at the fast timeline scientists had to produce such an effective vaccine. “It’s just given to us in a shortened time frame as opposed to years and years,” he said. “These are only months, which is great.”

The Great Falls Clinic says they plan to give up to 500 vaccines in the coming days. Benefis Health System will begin vaccinating their employees on Thursday.

The vaccine will be distributed in three stages. In the first phase, there will be a limited supply of the vaccine, and it will go to health and infrastructure workers and those at increased risk of serious illness from COVID. In phase two, which can be about three to six months after the arrival of the first vaccines, people with an increased risk of contracting the virus are given priority. In phase three, when the vaccine is widely available to anyone who wants to get it, healthy adults with limited or no chronic health problems can get the vaccine, along with anyone who has not yet received it. State officials estimate that Montana will enter this phase at least six months after the vaccines are distributed, if not longer. Click here for more information.

The federal Food & Drug Administration says of possible side effects: “The most commonly reported side effects, which typically lasted several days, were injection site pain, fatigue, headache, muscle aches, chills, joint pain, and fever. Note that more people experienced these side effects. than after the first dose, so it is important for vaccination providers and recipients to expect some side effects to occur after each dose, but even more so after the second dose. “

The federal Centers for Disease Control & Prevention (CDC) say about possible side effects associated with the vaccine. They include pain and / or mild swelling on the arm where you are receiving the injection; and possibly a brief period of headache, chills, fever and fatigue. The CDC says: “COVID-19 vaccination will help protect you from getting COVID-19. You may experience some side effects, these are normal signs that your body is building up protection. These side effects may affect your ability to perform daily activities, but they should disappear. gone in a few days. “

(TUESDAY, DECEMBER 15) In a relatively normal-looking box, the first Pfizer COVID-19 vaccines arrived at Benefis Health System late Tuesday morning. We’re still waiting to find out exactly how many doses were in the shipment, but Benefis officials told MTN on Tuesday that they thought they might be getting more than the original 975 doses they originally expected.

The shipment contained the assigned vaccines for Benefis and the Great Falls Clinic, which will remain with Benefis until the Clinic is ready to collect their share. Because Benefis has the ultra-cold storage needed to store the vaccines (between -112 degrees and -76 degrees Fahrenheit) to keep the vaccines safe and ready to use, the two hospitals will work together in this process.

“Our clinical teams are working very closely to address all of these concerns to make sure we are all getting the right amount of vaccines we need and to make sure they are properly stored,” said Kaci Husted , VP Benefis. of Communication & Business Development. “Obviously we don’t want to be in a situation where one of the vaccines becomes unusable due to storage issues, so we’ve now got all those logistics and plans in place with our clinical teams and our pharmacy.”

According to the FDA, the vials of the vaccine should be thawed before distribution. They can either be thawed in a refrigerator between 35 degrees and 46 degrees Fahrenheit and stored there for up to five days, or they can be thawed at room temperature (up to 77 degrees Fahrenheit) for 30 minutes and then used immediately.

The Great Falls Clinic will administer the first vaccine on Wednesday at 2 p.m. and Benefis hopes to follow suit on Thursday morning.

The clinic has not yet stated how long they think it will take to get all of their qualified employees vaccinated.

As for when the next round of vaccinations will arrive, as well as the second doses of these first vaccines, officials are still waiting for an exact timeline, but they expect more to ship next week.

“We think we’ll get more next week,” Husted said, adding that the hospital is still waiting for details on exactly when the second round one dose will arrive. “In particular, the allocation going to our Senior Services division and our Critical Access Hospitals is expected to be here next week.”

The advent of these vaccines is seen for many people across the country as the only light at the end of a very long tunnel. At Benefis it is a sign of progress. Husted said that while the hospital will enforce all of its masking and other safety protocols going forward, it is undeniable that this is a positive development in the country’s fight against this pandemic.

The vaccine will not required by law, but some companies may require it for employees.