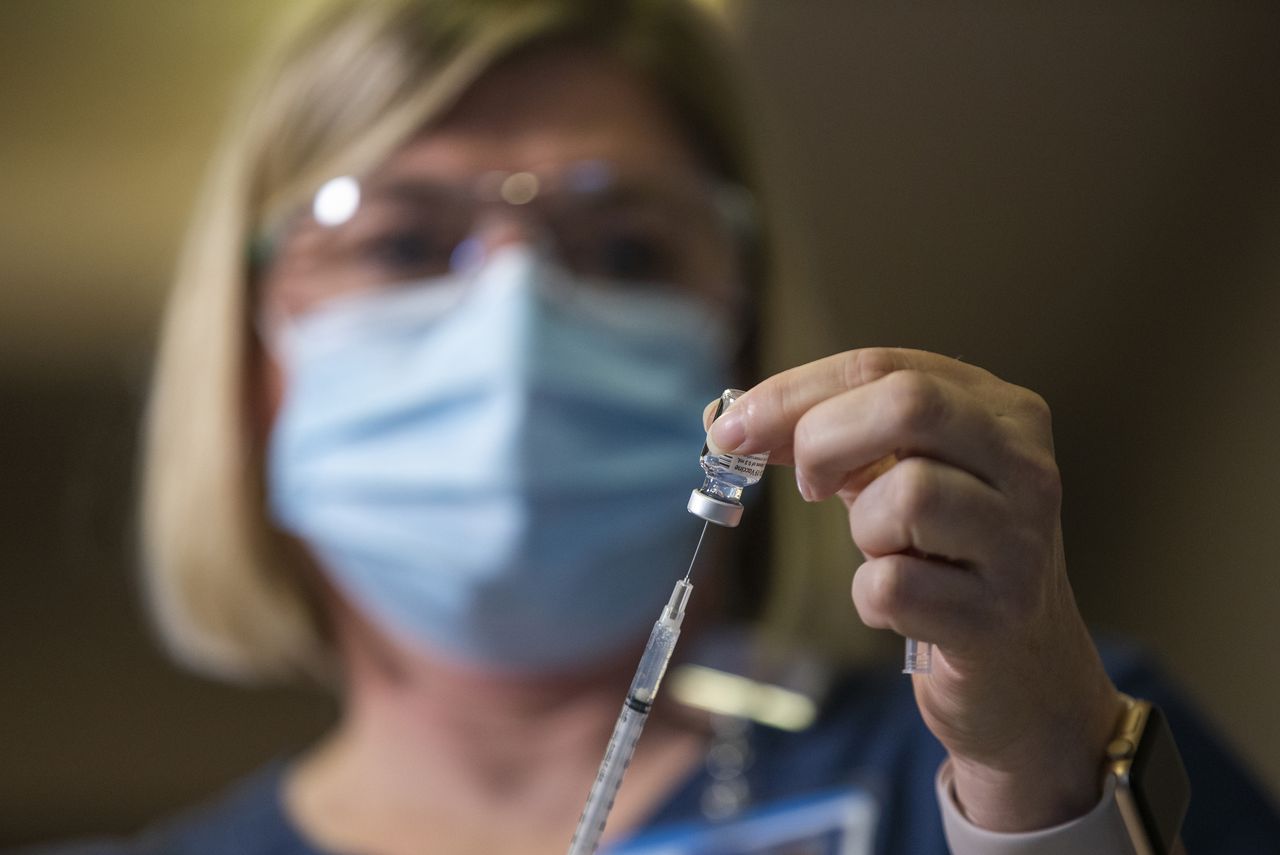 Five health workers at a North Portland hospital were ceremonially announced Wednesday as the first people in Oregon to be injected with the new COVID-19 vaccine – marking the beginning of a massive effort to educate at least 3 million Oregonians in the next six months. inoculate. nine months.

“3 – 2 – 1 – GO!” said a spokesperson for the Legacy Emanuel Medical Center, as five medical employees sitting in a row of chairs were simultaneously injected with the Pfizer-BioNTech vaccine at 11:08 a.m.

While the livestream vaccinations were considered the first in Oregon, Saint Alphonsus Medical Center in Ontario was actually the first to begin immunizing health care providers against COVID-19 Wednesday morning at about 9am. President and Chief Nursing Officer Dina Ellwanger said 20 medical workers had received vaccinations in the first two hours of her hospital’s vaccination clinic.

The first shipments of the Pfizer-BioNTech vaccine left for all 50 states from the Pfizer plant in Michigan on Sunday and the first vials arrived early Monday morning in Oregon, making Oregon the 49th state in the country to begin immunizations.

When Patrick Allen was questioned by a reporter about the timing, Oregon Health Authority director Patrick Allen said the delay is not indicative of problems with the vaccine being distributed or administered. Rather, he characterized the timing of the state as ‘normal’.

“This is going to be rolled out soon,” said Allen.

Government Kate Brown’s office coordinated the highly anticipated vaccination event Wednesday, saying the inoculation of the state’s first health workers marks the beginning of a new chapter in the pandemic. Nearly 17 million Americans have been infected with the coronavirus and more than 300,000 died as scientists tried to develop a vaccine in record time.

“This is really the moment we’ve all been waiting for,” said Brown.

“The delivery of a safe and effective COVID-19 vaccine gives us all an overwhelming sense of hope and promise,” she added.

In total, Allen said 5,850 doses of the vaccine have reached four hospital systems in the state: Legacy, Oregon Health & Science University, Saint Alphonsus, and Kaiser Permanente. Allen said he expects Oregon will get more next week and the week after.

The 5,850 doses fall far short of the 35,100 doses the Oregon Health Authority previously expected for this week. It is unclear why the state did not receive the expected doses. Allen did not fully explain why, and an agency spokesman did not immediately respond to questions.

“This is the amount we have been able to get into the federal system and we have divided it among the five hospitals that have ultra-cold storage capabilities,” he said.

Allen’s count does not appear to include vaccines shipped Tuesday to a federal facility called the Portland VA Medical Center. A spokesperson for the VA Portland Health Care System, which operates the medical center, said the system received 2,925 doses. However, some of those doses will be given to veterans in a Vancouver nursing home.

By the end of the month, Allen said hospitals and long-term care facilities will have received 228,400 doses – enough to vaccinate about 114,200 Oregonians. The Pfizer-BioNTech vaccine and the Moderna vaccine, expected to be approved later this week, require two doses to be fully effective.

Mayra Gomez, a nurse in Legacy Emanuel’s intensive care unit, was one of the first five at her hospital to be immunized.

“I use this vaccine for my family and also for my community,” said Gomez. “As a Spanish nurse, this disproportionately affects people of color and I want to lead by example.”

Of the more than 96,000 Oregonians known to be infected with the coronavirus, about 30% are Latino. Health experts say that building trust within these and other minority groups is key to achieving immunity to the herd through vaccinations.

Ansu Drammeh, a cardiovascular ICU nurse at OHSU, became the first to receive the vaccine there. He too said he wanted to be a role model. He is black and an immigrant from West Africa.

“As health professionals, we have to be the role models for the public, for our patients, for our families,” Drammeh said. He said one of the first things patients will ask their healthcare providers is, ‘did you take it yourself? Your answer is better, “Yes, I have.” “

Manjula Raghu said she volunteered to be one of the first to get the COVID-19 vaccine after her manager asked who wanted an injection. Raghu supervises about 200 domestic workers at Legacy Emanuel and Randall Children’s Hospital and said she wanted to show them the vaccine is safe.

Raghu, 65, said she also wanted to get a vaccine as soon as possible to better protect her husband, who she says received a heart transplant 21 years ago and is now very ill.

“If he gets it, he’ll never come back,” Raghu said.

Allen, the director of the Oregon Health Authority, said the pandemic has been responsible for a devastating 9 1/2 months.

Since the first Oregon case was diagnosed 292 days ago, Oregon has identified about 97,600 more and 1,262 people had died on Wednesday. On April 1, the Institute of Health Metrics and Evaluation at the University of Washington expects the death toll in the state to more than quadruple – to about 5,100, even with a “rapid rollout of vaccines.”

It is expected to take until April, May or June for most of the general population to have access to the vaccine.

The mood at Wednesday morning’s vaccination event at Legacy Emanuel was marked by a seesaw of anticipation, fear, focus and joy.

Kelley Callais was one of five health professionals responsible for shooting the historic footage at the facility.

Four syringes lay parallel to each other on the table in front of her, next to a container with two purple caps of the COVID-19 vaccine and three pink caps of a liquid to dilute the vaccine.

She held a vial of vaccine in her left hand and gently pulled out 0.3 milliliters of liquid with her right hand.

“I just wanted to do it right,” Callais said in an interview after the vaccination event.

After quite an hour of preparation, the twenty or so people in the room were silent awaiting the shots. At the end of the spokesman’s countdown, the injections went in.

Callais jumped and pumped her fist in the air after injecting the vaccine into the left upper arm of her assigned employee, an emergency room nurse.

That nurse, Jamie Carlson, stared straight ahead, then lifted her other arm in a gesture of victory and clapped.