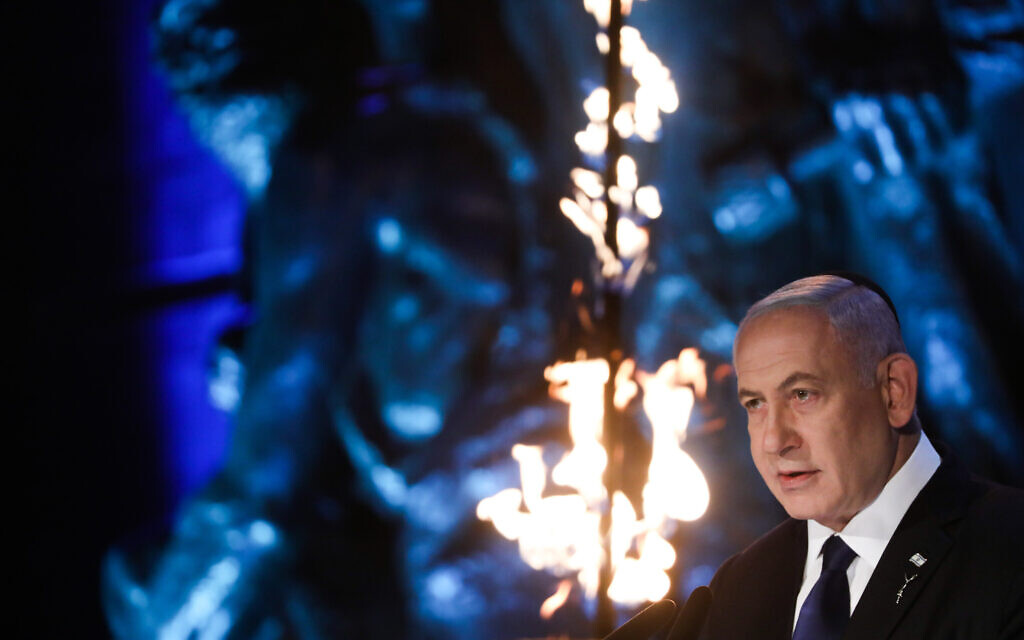 Prime Minister Benjamin Netanyahu warned on Wednesday that Israel will not be bound by a revived nuclear deal between world powers and Iran, stating that the Jewish state is only obliged to defend itself against those who try to destroy it.

Speaking at the Yad Vashem Memorial Museum during Israel’s official Holocaust Remembrance Day ceremony, Netanyahu referred to negotiations in Vienna to bring the US back into the 2015 nuclear pact while getting Iran to stick to its commitments to the unraveling deal.

“A deal with Iran that threatens us with destruction will not oblige us,” Netanyahu said.

“Unlike in the past, there is no one in the world today who will deprive us of the right and power to defend ourselves against an existential threat,” he said. “The nuclear deal with Iran is back on the table. Such deals with extreme regimes are worthless. ”

“I also say to our best friends, ‘A deal with Iran that threatens us with destruction will not oblige us.’ Only one thing will oblige us: prevent those who want to destroy us from carrying out their plans. ”

Netanyahu has often used his speeches at Holocaust-related events to invoke Iran as the new existential threat to the very existence of the Jewish people.

US President Joe Biden has said he is willing to reverse his predecessor Donald Trump’s decision to withdraw from the historic 2015 nuclear deal, which has been negotiated to ensure that Iran does not develop a military nuclear program , but the White House has insisted that Iran return to compliance first.

Tehran demands that the US lift the first sanctions imposed by Trump, leaving the parties to an impasse. Netanyahu opposed the nuclear deal, known as the Joint Comprehensive Plan of Action, from the start.

In his speech, the prime minister also denounced the “scandalous” decision of the International Criminal Court to investigate Israel for possible war crimes against Palestinians.

“The Jewish people were defenseless against the Nazis, but are no longer, and have every right to defend themselves against their enemies,” he said.

The ICC, he noted, was shaped in the image of the courts of the Nuremberg trials that brought the Nazis to justice. But “from Nurenberg to The Hague, things were turned upside down. A body created to defend human rights has become a body that, in effect, defends those who violate human rights. “

Speaking for the prime minister, President Reuven Rivlin dedicated his speech to the 900 Holocaust survivors who died in the coronavirus outbreak in the past year.

After surviving the atrocities of the Nazis and the perilous journey to Israel in the years between the end of World War II and the founding of the State of Israel in 1948, “the last battle of their lives they fought alone, behind masks and gloves, at a distance from their loved ones, thirsty for contact. “

“Tonight our hearts are with them and their families who are here with us,” Rivlin said.

“The memory we carry in our hearts is a sacred duty,” Rivlin said. “Whether we like it or not, the memory of the Holocaust shapes us as a nation. The Holocaust offers us and our country, the State of Israel, the endless mission of remembrance. “

This year’s commemoration ceremony has reverted to the traditional format of a gathering of dignitaries, Holocaust survivors and their families at Yad Vashem in Jerusalem. Last year, due to the outbreak, the ceremony was pre-recorded without an audience and broadcast later.

Commemorative events continue on Thursday, when a siren sounds for two minutes at 10 a.m., typically bringing Israeli outdoors to a halt. Pedestrians are in place, buses stop in busy streets and cars stop on major highways, their drivers stand on the road with their heads bowed.

At 11 a.m., there will be an official ceremony in the Knesset at which lawmakers will read out the names of Holocaust victims.

Holocaust Remembrance Day is one of the most solemn dates on the Israeli calendar. Survivors usually attend memorial ceremonies, share stories with teenagers, and participate in memorial marches in former concentration camps in Europe.

Agencies contributed to this report.

I believe our reporting sets an important tone of honesty and decency that is essential to understanding what is really happening in Israel. It takes a lot of time, commitment and hard work from our team to get this right.

Join the Times of Israel Community Join our Community Already a member? Log in to stop seeing this