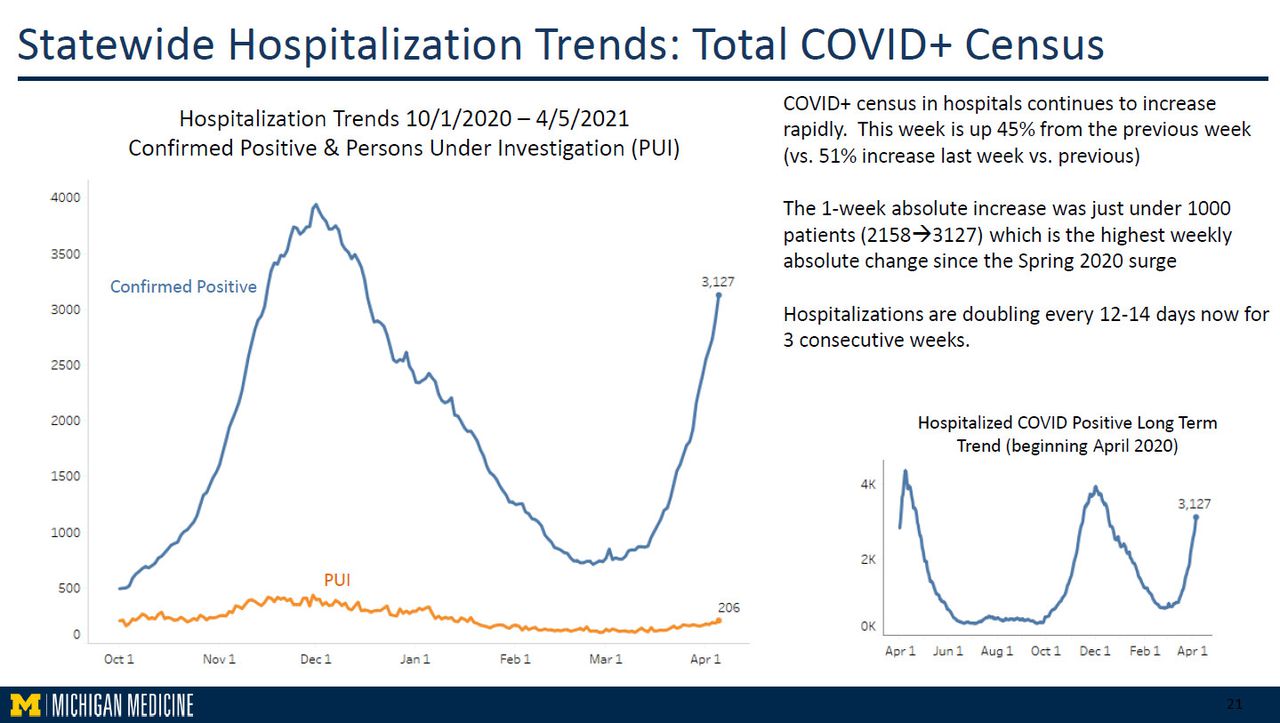 The COVID-19 hospitalizations in Michigan follow a wave of new cases in recent weeks, putting all other states in the lead in the number of hospital and ICU beds used for coronavirus patients.

On Wednesday, April 7, Michigan hospitals treated 3,595 patients with confirmed or suspected cases of COVID-19. That’s a significant increase from 2,424 such patients a week earlier, and fewer than 1,000 patients a month ago.

In fact, the last week-by-week peak is the largest of its kind since the first spring rise in 2020.

When asked on Wednesday what it would take to tighten restrictions again statewide, Governor Gretchen Whitmer said her administration is closely monitoring hospital numbers.

“You know, we talk to our hospitals every day to check in, see what the rates are, see if they are concerned,” Whitmer said. “Right now… we have hospital admissions that are up, but they are nothing like what we saw last spring when we were so worried about the collapse of our health system.

“They are not even what we saw in the fall.”

However, recent Michigan Medicine estimates expect the state to set a new hospital admission record as early as Monday, April 12. The latest model of the health system, presented by MDHHS during a virtual media call Wednesday, projects that 4,522 Michiganders will be hospitalized next week.

Another projection estimates that the state’s COVID-19 patients could climb into ICU beds from 488 a week ago and 668 Wednesday to 888 on Monday. That would surpass the autumn peak (814), but would not come close to the April 2020 peak of more than 1,600.

MDHHS director Elizabeth Hertel said hospitals are starting to look into the execution of their peak plans.

“We know our hospitals are well equipped to handle these spikes, we have unfortunately seen them do it a number of times and we remain here ready to support them in whatever they need,” said Hertel. “As we enter spring, we will continue to work to make sure people use the mitigating measures, continue masking, continue social distance, continue avoiding gatherings and really focus on how to make sure we keep kids safe in school. Those are the steps we keep taking. “

Related: Michigan coronavirus data for Wednesday, April 7: Hospital admissions up 1,000 plus over the past week

Hospital admissions have increased for all age groups, led by residents aged 50 to 59 since February 28. In the past week, however, 40-49 year olds represent the largest increase in daily hospital admissions.

Below is an overview of the daily average hospital admissions for each age group and the percentage change over the past week:

Health officials say vaccination coverage, which is higher among the priority older groups, likely contributed to the lowered admission rate for over-65s. The three vaccines available in the US have all been shown to be effective in reducing the risk of severe COVID-19 and thus hospitalization.

All regions of Michigan report an increase in hospital admissions. The Detroit and Traverse City regions have reported increases for five weeks, while the Kalamazoo region has reported increases for four weeks, the Jackson region for three weeks, and the Grand Rapids, Saginaw, Lansing, and Upper Peninsula regions for two weeks.

In addition, daily case and test positivity rates have also increased in all eight regions and statewide.

Detroit regions have the worst hospital admissions, at more than 400 per million residents. Looking at the latest week-to-week adjustments, the Grand Rapids region has seen the largest increase (101%), followed by the Upper Peninsula region (80%).

Michigan added 8,015 new cases and 30 additional deaths on Wednesday, while the seven-day average was up to 6,174 cases and 34 deaths per day.

Whitmer on CNN: Michigan could do away with COVID-19 restrictions and reopen completely this summer

Nearly half of new virus infections in the US occur in just 5 states, including Michigan