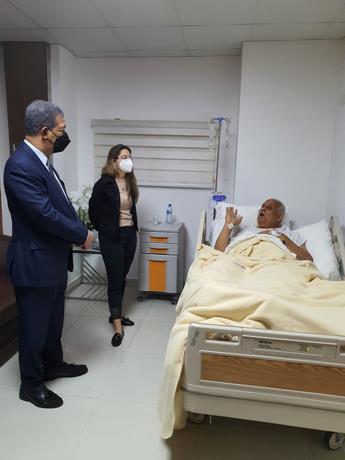 Former president of the republic, Leonel Fernández, paid a visit to Jaime David Fernández Mirabal on Thursday, who is being admitted to the Modern Medical Center after suffering severe chest pain.

Via a publication on his Twitter account, the former president indicated that he could also speak with Minou Tavarez Mirabal.

Visiting the esteemed friend and companion of a thousand battles, former Vice President Jaime David Fernández Mirabal. The moment we expressed our desire for his speedy and full recovery, he was very excited. It’s nice to greet the esteemed @minoutavarezm there ”, wrote Fernández along with photos with the first cousins ​​Mirabal

The former Vice-President of the Republic underwent catheterisation during the first reign of Leonel Fernández (1996-2000).

According to the information, the evolution of the former Minister of Sports and Environment is satisfactory.