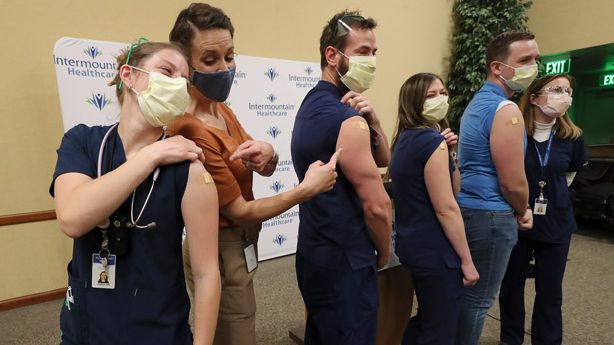 SALT LAKE CITY – Five University of Utah health professionals and four Intermountain Healthcare employees became the first Utahns to receive the COVID-19 vaccine outside of a clinical trial on Tuesday.

Vaccinations took place Tuesday at the University of Utah Hospital and Intermountain LDS Hospital. Christy Mulder, an American intensive care nurse, was the first person to receive the vaccine in Utah, U. health officials said on Twitter.

“It’s an overwhelming day today, a lot of emotions,” Mulder said at a press conference Tuesday after the vaccinations. “I am excited about the next step we are taking to end this painful pandemic.”

Hospital workers at Intermountain LDS Monte Roberts, Amanda Vicchrilli, William Brunt and Sophie Woodbury were given the vaccine shortly after 1 p.m. on Tuesday.

Roberts, who was visibly emotional after becoming the first Intermountain worker to be vaccinated, said it has been an uphill battle to see patients affected by COVID-19. The disease affects everyone, young and old, and will not go away, he said.

Roberts said he was thrilled to get the vaccine, not only to protect himself but also to protect his patients, his family, and his community.

“It’s huge because it glows,” he said at an Intermountain press conference shortly after he was vaccinated. ‘We can beat this. We’ll get through this together. ‘

Primary health workers are the first to receive the vaccine this month. Residents and staff of long-term care facilities, as well as teachers, will also be part of the first wave of Utahns to be vaccinated, health officials said. About 154,000 doses of the vaccine are expected to arrive in Utah this month.

Kavish Choudhary, senior director of the U. health pharmacy, on Tuesday described the “massive effort” to prepare the vaccine for administration.

The vaccine arrived in a surprisingly small box around 7 a.m. on Tuesday, he said. The doses were transported to the U. hospital about an hour later and had to be kept in the freezer for about two more hours before they could be administered, he added.

“A bit of a whirlwind morning,” Choudhary said.

On Thursday and Friday, the U. will expand to open a larger workers vaccination clinic, Choudhary added. Those clinics will have 15 people administering the vaccine, and they will be able to vaccinate one worker every 10-15 minutes, he said.

Pharmacy workers are still getting used to the COVID-19 vaccine vials, which are different than they are used to, so the vaccine rollout will be more gradual, Choudhary said.

“We are grateful to be able to share this hope with our healthcare providers,” said Dascomb.

Hartsell said the vaccine was “probably one of the best Christmas presents we’ve ever received.”

Mulder said that while death has always been part of working in an ICU, there is something different about COVID-19. It’s painful to see patients suffer for so long, she said.

“That weight feels heavier over time,” said Mulder. But being able to get the vaccine gave her a sense of hope, she added.

“It’s really encouraging, and it really feels like a weight being lifted,” Mulder said. “It’s so special to be a part of it.”

Woodbury, who has worked at LDS Hospital for about five years, said vaccination will help her own mental state.

Until now, workers have not been able to offer much hope to COVID-19 patients who are struggling, she said. But knowing there is a vaccine that can help protect people from the disease will enable her to treat her patients with more kindness and hope, Woodbury added.

“Today is a hopeful day,” she said. “I know there will come an end.”

She said she now plans to speak out about the benefits of the vaccine and help people make good decisions about getting it.

“I feel a bit of an ambassador now,” she said.

Utah Department of Health state epidemiologist Dr. Angela Dunn, who presided over the vaccinations at U. Hospital and LDS Hospital, said it was hard to believe it hadn’t been until a year since she had a conference call with federal illness. experts who learned about a new coronavirus.

Now there is a vaccine, Dunn said.

“This is a huge, memorable day that gives me so much joy and pride,” she said at the Intermountain press conference on Thursday. “We have a great state that has come together.”

Utah did not experience the post-Thanksgiving spike many predicted, Dunn added.

“We are in a much better place today than I expected,” she said.

That said, Utah is heading into a new holiday season, and colder months are coming, Dunn said. And while Utah hasn’t had a huge wave after Thanksgiving, the state still reports about 2,000 cases a day, which is too much, she said. The number of cases in that range means that hospitals are still at capacity.

So now it’s more important than ever to keep wearing masks, stay socially aloof, stay home when you’re sick, and practice all the other public health measures that officials recommended during the pandemic, Dunn said.

At least 50% of Utahns must be vaccinated to stop the spread of COVID-19, and a 70-80% inoculation rate is more ideal, Dunn said. Vaccines are not expected to be widely available to the general public until the summer of 2021, so she urged people to remain vigilant to prevent the spread of the disease in the meantime.

“There’s a light at the end of the tunnel – we’re just not quite there yet,” Dunn said. “It’s so important that we keep dropping our business.”