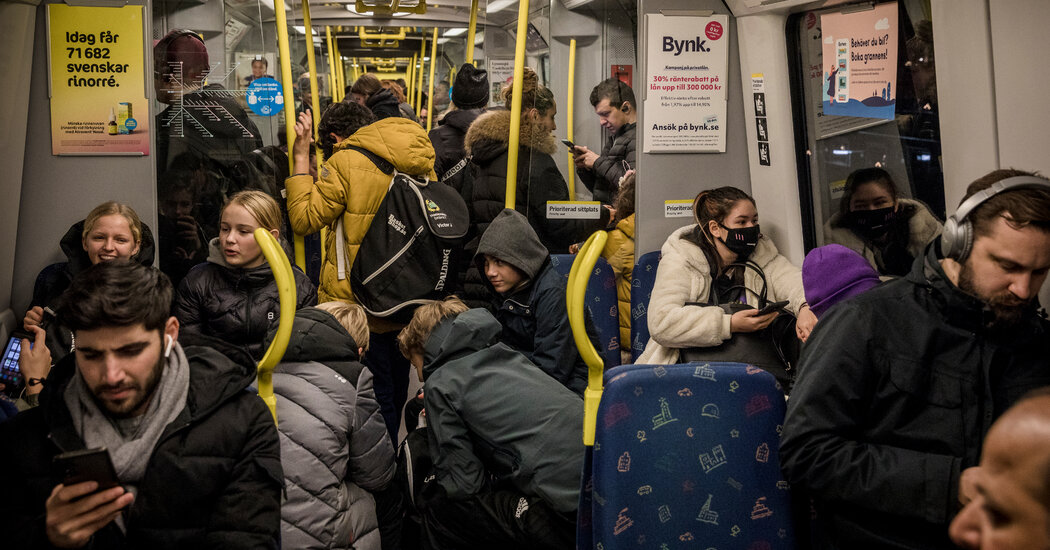 Sweden was an outlier in the global pandemic, shunning lockdowns and largely keeping restaurants, bars, schools, cinemas and gyms open. And while the death rates were high compared to its Nordic neighbors, they were comparable to those of larger European countries.

Now, a second wave has sparked another wave of infections and inundates Stockholm’s emergency services, forcing authorities to rethink their approach. They imposed new restrictions at the end of November that bring the country’s response somewhat more in line with the rest of Europe. They include drastic cuts in the size of public gatherings and some school closures.

But with ski lifts, restaurants and bars all remaining open, Sweden’s tighter restrictions still pale in comparison to the rest of Europe and there are growing concerns that not enough is being done. Intensive care beds in hospitals in the Stockholm area are all currently occupied, regional health director Bjorn Eriksson said at a news conference on Tuesday.

“We have much more than 100 percent of the capacity in intensive care. We are approaching double the number of places available, ”he said.

Since the start of the pandemic, there has been a debate both inside and outside Sweden about how to contain the virus. While other countries closed in the spring, Sweden remained open over concerns that anyone hiding at home would have long-term adverse effects on children and adults and could lead to depression, suicide, delayed health care and job losses .

On Monday, Swedish Prime Minister Stefan Lofven said the country’s experts had underestimated the likelihood of a second wave. It was the first time that an official has criticized, even obliquely, the Public Health Agency of Sweden, the expert group tasked with creating coronavirus policy and the epidemiologist who runs it, Anders Tegnell.

In October, Mr Tegnell said he hoped the spread of immunity among the population would help Sweden get through the fall with a low number of cases.

“I think most in the profession did not see a second wave coming,” said Mr Lofven in an interview with the Swedish newspaper Aftonbladet.

Mr. Tegnell is no longer responsible for virus policy and increasingly has to share the stage with Swedish politicians who have taken on a more active role.

During the first wave, there were many deaths, especially among the elderly. On Tuesday, a special committee concluded in an initial report that the government had failed to protect the elderly and was unprepared for the pandemic. That said, the death toll among people over 80 across Europe is high.

Infection rates and deaths have risen steadily since October. On Tuesday, Sweden had reached a total of 320,098 cases since the start of the pandemic, while neighboring Finland, with a population of about half of Sweden, has 31,110 cases, less than 10 percent of Sweden’s.

The total death toll in Sweden was 7,667 on Tuesday. The country now has 74 deaths per 100,000 cases, less than the UK with 97, but much more than neighboring Norway, with seven.

“I’m afraid it will get worse,” says Karin Hildebrand, a cardiologist in intensive care at Sodersjukhuset hospital in Stockholm. “We are all afraid of the coming weeks. We don’t have enough staff to deal with this. “

Nurses have left their jobs in large numbers since the start of the pandemic.

“About 3,000 nurses quit their jobs during the first 10 months of the year,” said Sineva Ribeiro, the chairman of the Swedish Association of Health Professionals. “Those who stayed behind worked very, very hard.”

And now the government is being criticized for not doing enough.

“I was hoping this dire situation would change things, but yesterday they opened the ski lifts in Sweden,” said Fredrik Elgh, a professor of clinical virology at Umea University and a well-known critic of the official coronavirus response here. “Considering such actions, I don’t think the government is taking the harsh action I had hoped for.”

Mr Lofven’s government, in an effort to stop the spread of the virus, issued new recommendations at the end of November banning gatherings of more than eight people.

While schools for children under 16 have remained open during the pandemic, some are now closing after an outbreak. A ban on serving alcohol after 10 p.m. has been introduced. On Monday, a state agency sent out mass text messages to warn people to limit Christmas gatherings to a maximum of eight people.

But officials ask, not order.

Under Swedish law, the government is not allowed to force people to stay at home or to fine those who ignore the recommendations.

The Netherlands, with lower infection rates than Sweden, was completely shut down on Tuesday. Germany will close most of the country on Wednesday.

Restaurants, coffee shops and bars in Sweden will remain open.

Face masks are not recommended in Sweden because the Public Health Authority says there is not enough scientific evidence that they work.

So on Monday afternoon the “Chic Konditori”, which sells coffee and sweets in Stockholm, was packed with customers. Tea Kagstrom, an 18-year-old college student with feathered blonde hair, was enjoying a cup of coffee with two friends. Asked why she wasn’t wearing a face mask, she replied because it’s not required.

“The Public Health Authority has not said we should wear masks in public places,” she said.

The government is in the process of drafting an emergency law that would give it the power to order lockdowns and shut down businesses should the virus spread.

“We need a few weeks of lockdown to bring the numbers down,” said Tove Fall, professor of molecular epidemiology at Uppsala University near Stockholm. “Other countries are taking much stricter precautions at lower transmission levels.”

Some are angry that face masks are not used in Sweden.

But others still argue that the virus threat is exaggerated.

“Every death is sad, but it has to be proportioned. About 85 percent of those who died in Sweden also had some other disease, and many of those who died this spring were likely to have died later this year, ”said Johnny Ludvigsson, a pediatrician at Linkoping University, in an interview with the Aftonbladet newspaper.

“I think we are overly dramatic about the number of deaths during the corona pandemic,” he said. “Compare that with what will happen if we have increased mortality among younger people due to increased heart attacks, late cancer diagnosis, or increased levels of depression that could end in suicide.”