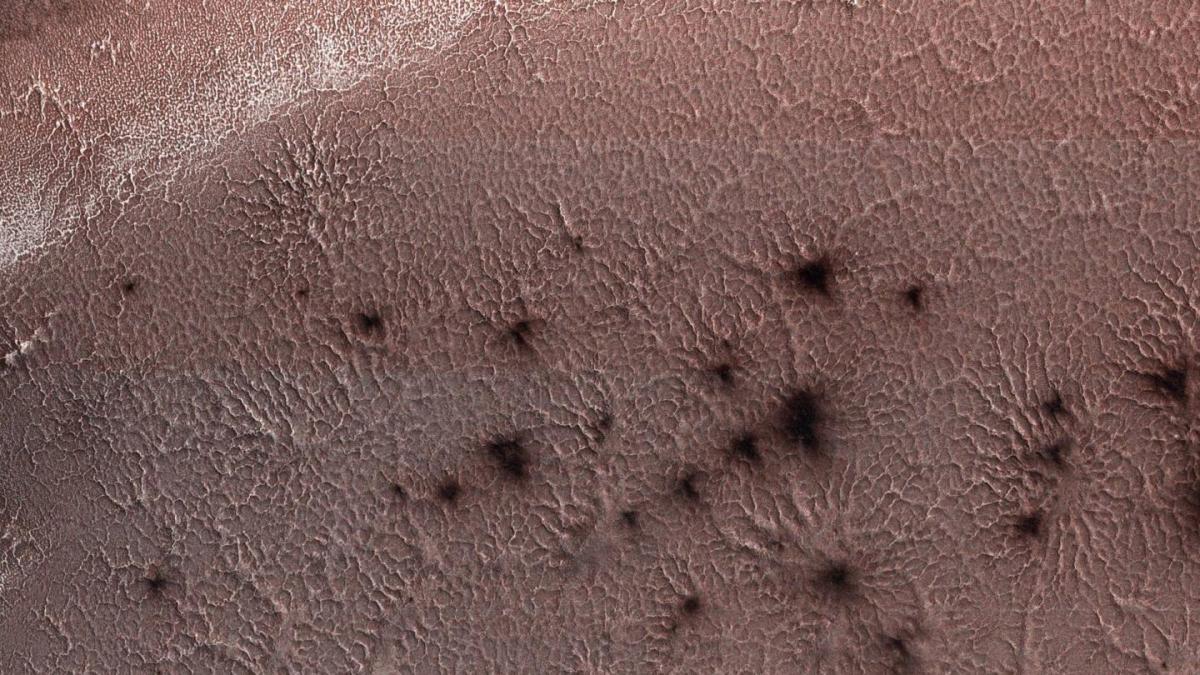 The formation of the enigmatic “spiders” on the surface of Mars already has a proven explanation. A team of researchers has provided the first empirical evidence that these markers on the planet’s surface are formed by the sublimation of CO2 ice, a hypothesis being considered by the scientific community.

Spiders, formally called araneiformes, are radial patterns with numerous arms in patterns resembling the roots of a plant. They are formed seasonally with the arrival of spring and appear only in middle and high latitudes in the south of the planet.

Spiders on the surface of Mars are believed to be etched by the sublimation process that involves the direct passage of solid dry ice from CO2 to gas that takes place in the second season of the year. This is what is known as the Kieffer hypothesis.

Unlike Earth, the atmosphere of Mars consists mainly of CO2. When the temperature drops in winter, the gas deposits on the surface in the form of frost and ice. In the spring, sunlight penetrates the translucent ice and warms the soil below.

The ice would then sublimate from its base, building pressure that would eventually break it. This allows the pressurized gas to escape through the cracks. The vapor paths would leave the araneiform patterns seen on Mars.

It was not known whether the CO2 ice sublimation process was possible or directly observed on Mars.

Until now, it was not known whether such a theoretical process was possible or directly observed on Mars. These formations are not found on Earth, so the absence of analogues complicated their physical study.

The team’s new research, published in Scientific reports, conducted a series of experiments simulating atmospheric pressure on Mars. In this way they were able to investigate the phenomenon empirically.

“The Kieffer hypothesis has been well accepted for over a decade, but so far it has been placed in a purely theoretical context,” said lead author Lauren Mc Keown, a researcher in Planetary Sciences at the University of Asa. “Experiments directly show that the spin patterns we observe on Mars can be carved out by direct conversion of solid dry ice into gas.”

For the experiment, the research team drilled holes in the centers of CO2 ice blocks and on a sand bed in a vacuum chamber. They lowered the pressure in a vacuum chamber to the parameters of the Martian atmosphere – six millibars – and then used them to place the ice on the surface.

The team used a phenomenon known as the Leidenfrost effect, where, when a substance comes into contact with a surface much hotter than the sublimation point, it forms a gaseous layer around it. When the block reached the sandy surface, the CO2 immediately went from solid to gas, leaving a plume of steam through the central hole.

By lifting the ice block, the team could see that the gas had eroded the sand into a spider pattern similar to that of Mars. The patterns were more branched when finer grain sizes were used.

The methodology used can be refocused to study the role of CO2 sublimation in the formation of other features of the surface of Mars, and in fact pave the way for future research into the sublimation processes in other fine-atmospheric planetary bodies such as the satellites Europa or Enceladus.