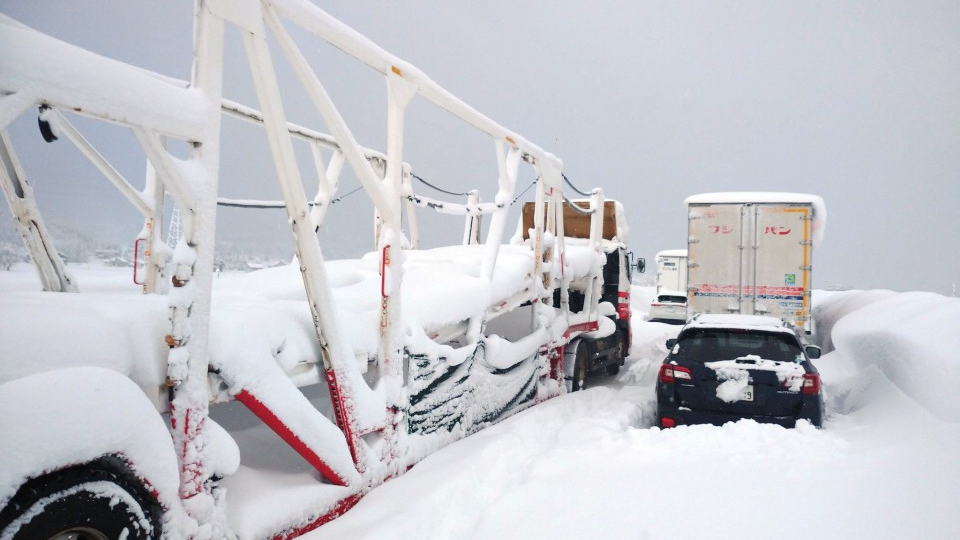 About 1,100 vehicles were stranded on a highway, and more than 10,000 households suffered blackouts on Thursday as heavy snow hit a large area along the coast of the Sea of ​​Japan, the government and police said.

The snow has disrupted multiple road and train services since Wednesday and is expected to continue to fall sharply in such regions through Friday, according to the Japan Meteorological Agency. He warned of further traffic disruptions due to the slippery roads.

The troops will be tasked with handing out food, fuel and blankets and affirming residents’ safety, Cabinet Secretary Katsunobu Kato said.

The government has set up a task force to deal with the snow, and a total of more than 10,000 households have lost power in Niigata, northwest of Tokyo, and Hyogo prefecture in western Japan, among others, Kato told a news conference.

According to Niigata police, about 1,100 vehicles were stranded on both sides of the Kanetsu Expressway, which connects Tokyo and Niigata.

Vehicles were stranded on Kanetsu Highway in Niigata Prefecture on December 17, 2020.

(Photo courtesy of a driver) (Kyodo)

Vehicles are stranded on Kanetsu Highway in Niigata Prefecture on December 17, 2020. (Kyodo)

According to police and highway operator East Nippon Expressway Co. at one point on Thursday morning, a line of cars reached 10 miles. The traffic jam was caused after a trailer got stuck in snow on Wednesday evening at a junction in Minamiuonuma, Niigata Prefecture.

Suga spoke at an emergency cabinet meeting in the afternoon, calling on the public to “remain vigilant about traffic disruptions and damage to facilities, as well as snow falling from roofs and avalanches, and to make the necessary preparations in advance”.

A woman in her 30s who was stranded in a car at a junction in Minamiuonuma was taken to hospital after complaining of respiratory problems, local rescue workers said.

“I have no information. I want to know what the current situation is and what time I can get out of here,” said a 40-year-old truck driver from Niigata prefecture, who spent the night. stuck on the road while trying to deliver goods to Gunma Prefecture.

About 300 vehicles were also stranded at a point on the Joshinetsu Expressway, which connects Niigata, Nagano and Gunma prefectures, after a truck failed to drive on Wednesday evening. The stalemate lasted until around 10am on Thursday.

Some areas in the country have seen record levels. Minakami in Gunma prefecture had 217 centimeters over a 72-hour period until Thursday morning, while Yuzawa in Niigata prefecture saw more than 180 cm from 8 a.m.

People try to remove snow from the roof of a house in Minakami, Gunma Prefecture, eastern Japan on December 16, 2020. (Kyodo) == Kyodo