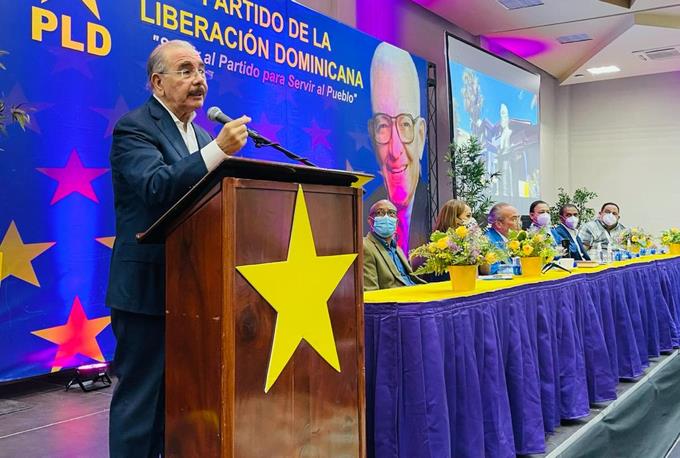 Former president of the republic, Danilo Medina, confirmed on Wednesday that the Dominican Liberation Party (PLD) is “back” after meeting with mayors and district directors of that political organization.

This was reported by the PLD in a statement, which also highlighted the work they must do to achieve their goals “for the party to shine and return to growth and stability in the country.”

According to the document, fifteen of the councilors present at the meeting presented their ideas and suggestions on the formation of the aldermen’s councils and asked for the formality of technical support from the PLD leadership.

During his presentation, the ex-president took up the suggestion of a technical team to recall that in the 1980s setting up such a committee was successful for the party, with the aim of advising and guiding the congregations.

Likewise, Medina insisted that the municipalities establish teams for the management of social networks, which defend their efforts and initiatives, and which also serve to maintain contact with the PLD addresses in municipalities and provinces, which will be linked to the party reorganization by a member of the Political Committee.

The former head of state also urged the mayors and directors in attendance to recall “the respectful treatment that the Dominican Liberation Party government’s leadership offered to councilors, regardless of political factions.”

What mayors and directors said

Ramón Santos, president of the Federation of Municipal Districts, has made recommendations regarding the City Hall Day, which is next Saturday, the attitude of the mayors, mayors and directors to enforce the so-called Golden Rule of the municipality.

Abel Martínez, Mayor of Santiago, explained that the municipal structure of the PLD is the main political force of that organization and invited his colleagues to live with the councilors of the Construction Councils and remain alert to any action by the ruling party .