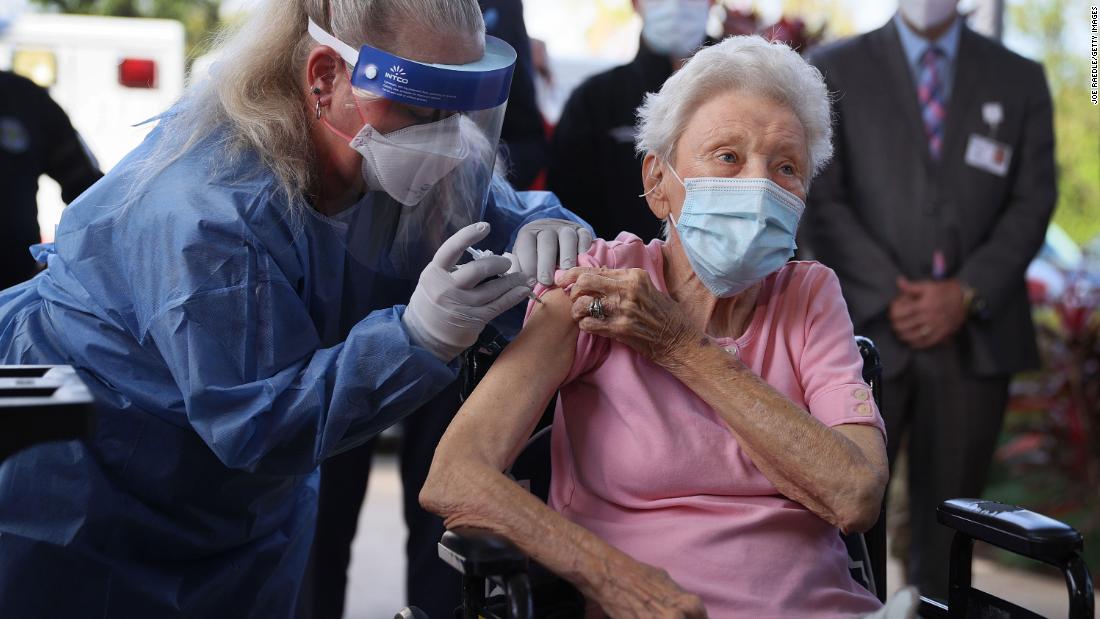 You think she should be vaccinated as you have heard that the vaccine is effective in inducing an immune response in older adults. Your brother disagrees. He is concerned that the vaccine development has been rushed and does not want your mother to be one of the first to receive it.

“This is a highly politicized environment, not only with regard to vaccines but also with regard to the existence of the virus itself,” said Michael Dark, a staff attorney at California Advocates for Nursing Home Reform. “It’s not hard to imagine disputes arising within families.”

About 3 million people – most of them elderly – live in nursing, care and group homes, where more than 105,000 residents have died from Covid-19. According to recommendations from the U.S. Centers for Disease Control and Prevention and several state plans, they, along with health professionals, should be among the first Americans to receive vaccines.

But long-term residents’ participation in the fastest and most comprehensive vaccination effort in US history is clouded by a major complication: More than half have cognitive impairment or dementia.

This raises a number of questions. Will all older adults in long-term care understand the details of the vaccines and be able to agree to them? If individual consent is not possible, how do families and deputy decision-makers get the information they need in a timely manner?

And what if surrogates disagree with an elderly person’s decision and try to intervene?

“Imagine the patient, who has some degree of cognitive impairment, says ‘yes’ to the vaccine, but the surrogate says ‘no’ and says to the nursing home, ‘How dare you do that?’ said Alta Charo, a professor of law and bioethics at the University of Wisconsin-Madison Law School.

Addressing these issues will take place against a background of urgency. Deaths in long-term care facilities are increasing dramatically, with new estimates suggesting 19 residents die from Covid-19 every hour. With viral outbreaks on the rise, already overwhelmed staffers may not have much time to sit down with residents to answer questions or have phone conversations with families.

Meanwhile, CVS and Walgreens, the companies that run vaccine programs in most long-term care settings, have aggressive schedules. Both companies have said the large-scale launch of the Pfizer-BioNTech vaccine – the first to be authorized by the Food and Drug Administration – will begin December 21. But facilities in some states can get supplies earlier. In total, there are more than 15,000 nursing homes and nearly 29,000 assisted living homes in the US.

At a meeting of the federal advisory committee on immunization practices early this month, Dr. Nancy Messonnier, director of the CDC’s National Center for Immunization and Respiratory Diseases, acknowledged that the agency was “very concerned” that information about vaccines would be adequately explained. long-term residents.

“It is very important for frail older people to make sure not only that they understand the vaccine they are receiving, but also that their family members do,” she said.

Each vaccine manufacturer must prepare a fact sheet describing what is known about the benefits and risks of a vaccine, which is not known, and clarifying that a vaccine has received “emergency use” from the FDA – conditional approval which falls. short of full approval. A second vaccine, from Moderna, is poised to get this kind of approval after an FDA meeting on Thursday.

Something that should be made clear to residents: Although vaccines have been tested on people 65 and older, those tests do not include individuals living in long-term care, according to Dr. Sara Oliver, a CDC expert.

Some operators have established communication plans around the vaccines and have already started intensive outreach. Others may not be well prepared.

Juniper Communities operates 22 senior residential communities (a self-contained nursing home, multiple memory and assisted living facilities, and two ongoing retirement care facilities) in Colorado, New Jersey and Pennsylvania. This week, it schedules an hour-long video conference session at the town hall for residents and families about vaccines against the coronavirus. Last week it held a similar event for staffers.

Juniper has signed a contract with CVS that requires each resident and staff member to fill out triplicate consent forms before being vaccinated. Where written consent cannot be obtained directly, verbal consent, independently confirmed, may be substituted. Walgreens has similar requirements.

For residents with a memory impairment, two Juniper nurses will contact whoever has decision-making authority by phone. “One will ask questions and receive verbal approval; the other will serve as a witness,” said Lynne Katzmann, founder and CEO of Juniper. Separately, emails, blog posts, and pre-recorded voice messages about the vaccines were sent to Juniper residents and employees starting in late November.

A key message is “we’ve done this before, not on this scale, mind you, and not at this import level, but we do flu vaccinations annually,” said Katzmann, who plans to be the first Juniper employee to use the Pfizer. vaccine when it comes to New Jersey.

At Genesis Healthcare are crucial messages: “These vaccines have been thoroughly studied, tens of thousands of people have already received them, they are very, very effective and no steps have been skipped in the scientific process,” said Dr. Richard Feifer. , executive vice president and chief medical officer. Genesis, the nation’s largest long-term care company, operates more than 380 nursing and residential care facilities in 26 states, with approximately 45,000 employees and more than 30,000 residents.

Medical directors of each Genesis facility have been scheduling video conferences with families, residents and staff for the past few weeks to address issues. They also distributed a letter and a question-and-answer paper prepared by the Society for Post-Acute and Long-Term Care Medicine, in addition to obtaining information through closed TV channels and social media.

In collaboration with researchers from Brown University, the company will monitor daily side effects long-term residents experience after receiving coronavirus vaccines. Most reactions are expected to be mild or moderate and disappear within a few days. They include fatigue, injection site pain, headache, body aches, fever and, in rare cases, allergic reactions.

Administration of the vaccine will take place over three visits for all long-term care facilities. In the beginning, all Genesis residents and staff are given vaccinations. In the second, three to four weeks later, those same people receive a second dose and new employees and residents receive a first dose. In the third, those who are still eligible for a second vaccination dose receive one.

What happens if many people experience unpleasant side effects and employees don’t come in for a few days during recovery? “It’s a very difficult problem and we are making contingency plans to address it,” said Feifer.

And what about continuous care retirement communities – also known as “life plan communities” – where residents of skilled nursing, assisted living and independent living can live close together?

Such is the case with Bayview in Seattle, which houses 210 residents in a 10-story building. For now, independently living residents aren’t on the priority list, but “I know there will be a contingent of residents and staff who don’t want to be vaccinated and we’ll see if we can use those vaccines for our self-reliance. People instead” says Joel Smith, the administrator of Bayview’s health services.

Logistical challenges will certainly arise, but many operators have an acute sense of mission. “It is critical that we lead the way out of this crisis,” said Genesis’s Feifer. “Nursing homes should go first and be the first to address the hesitation about vaccines directly and succeed in generating a high level of acceptance. There is no alternative, no Plan B at the moment. We have to be successful.”

KHN (Kaiser Health News) is a non-profit news service about health issues. It is an editorially independent program from KFF (Kaiser Family Foundation) which is not affiliated with Kaiser Permanente.