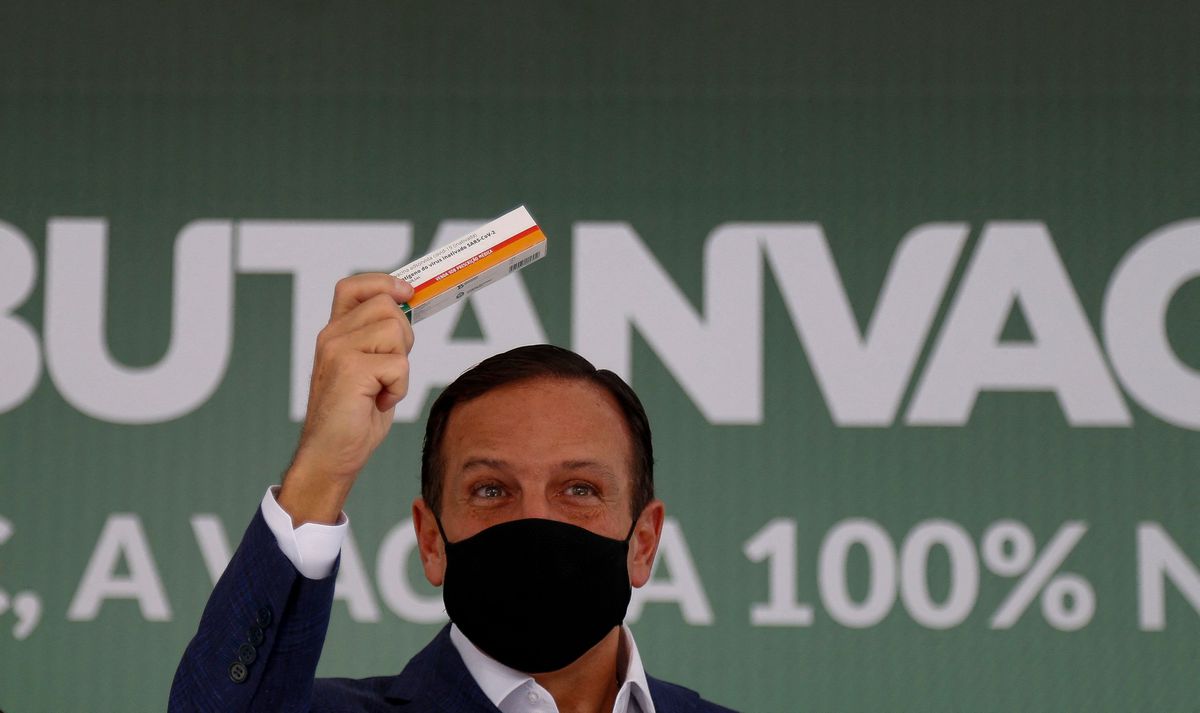 “A 100% Brazilian vaccine.” For example, the Governor of São Paulo, João Doria (Brazilian Social Democratic Party – PSDB), presented ButanVac, the first immunizer against covid-19 produced in Brazil. The vaccine has been developed by the Butantan Institute, which has requested Anvisa (the country’s regulatory agency) for permission to initiate phases 1 and 2 of the trials, in which its safety and ability to promote immune response will be evaluated with 1,800 volunteers . Then, in phase 3, the immunizer will be applied to up to 9,000 volunteers to determine its effectiveness. The vaccine has already presented a high immune response in preclinical studies conducted in animals, according to the institute, which may indicate that a single dose will be required for full immunization in humans, an advantage that only the immunizer manufactured by Johnson & Johnson It is expected that, if the tests are favorable, it will be available to the population by the end of the first half of this year.

Butantan Institute president Dimas Covas said production of the immunizer began in 2020. The vaccine was sent to India for animal testing and had “excellent” results. “Since then it has been an intense fight, an energetic effort on the part of the whole team, both from a production standpoint and from the standpoint of international negotiations,” he clarified. Butantan is the main producer of ButanVac, with 85% of the vaccine delivery capacity, in an international consortium that includes two other laboratories, one in Vietnam and one in Thailand, where Phase 1 has already started. Is that the vaccine is being delivered not only to Brazil, but also to other low- and middle-income countries, which have had a harder time buying the vaccines currently available. Covas still plans to send a clinical development file to the National Health Surveillance Agency (Anvisa) this Friday to seek approval for the next phases of the studies. Production of the vaccine should begin as early as May, and the plan is to make 40 million doses available by July, the Butantan Institute spokesman said.

The ButanVac technology is the same that is used in the production of the flu vaccine, which is already manufactured at the institute and produced in chicken eggs. According to Dimas Covas, no other covid-19 immuniser in the world uses this technology. According to him, this will make it cheaper and safer. “This is generation 2.0 of the vaccine. We have learned from previous vaccines and now we know what a good vaccine for covid-19 is, and it already contains some of these changes, ”explains Covas.

The immunization technology uses the inactivated avian influenza virus called Newcastle disease, which contains the protein S (Spike) of the coronavirus in an integral manner. When this protein is introduced into the body, it stimulates the immune response to COVID-19. This avian flu virus does not cause any symptoms in humans and is a very safe alternative, according to Butantan. According to Covas, ButanVac will already use the Amazon variant S protein, P.1, which is more transmissible and potentially more deadly.

Given that Butanvac uses a technology already widely used in the institute itself to produce the annual common flu vaccine, Covas believes this will be an additional factor in accelerating its development. The fastest developing covid-19 vaccines in the world took less than six months to complete stages 1 and 2. “But they were totally new,” said Covas.

If the tests prove efficacy and the new vaccine is approved, it will be an important addition for Brazil, which is currently suffering from a shortage of immunizers due to the lack of organization from the federal government and has so far vaccinated at a lower dose. than 7% of the population. And it will be a new political asset for Governor João Doria, a political opponent of President Jair Bolsonaro, who insisted on attending Friday morning’s press conference announcing the immunization. The Butantan Institute, affiliated with the São Paulo government, is already producing Coronavac together with the Chinese Sinovac laboratory, responsible for most of the vaccinations currently carried out in Brazil and initially despised by Bolsonaro.