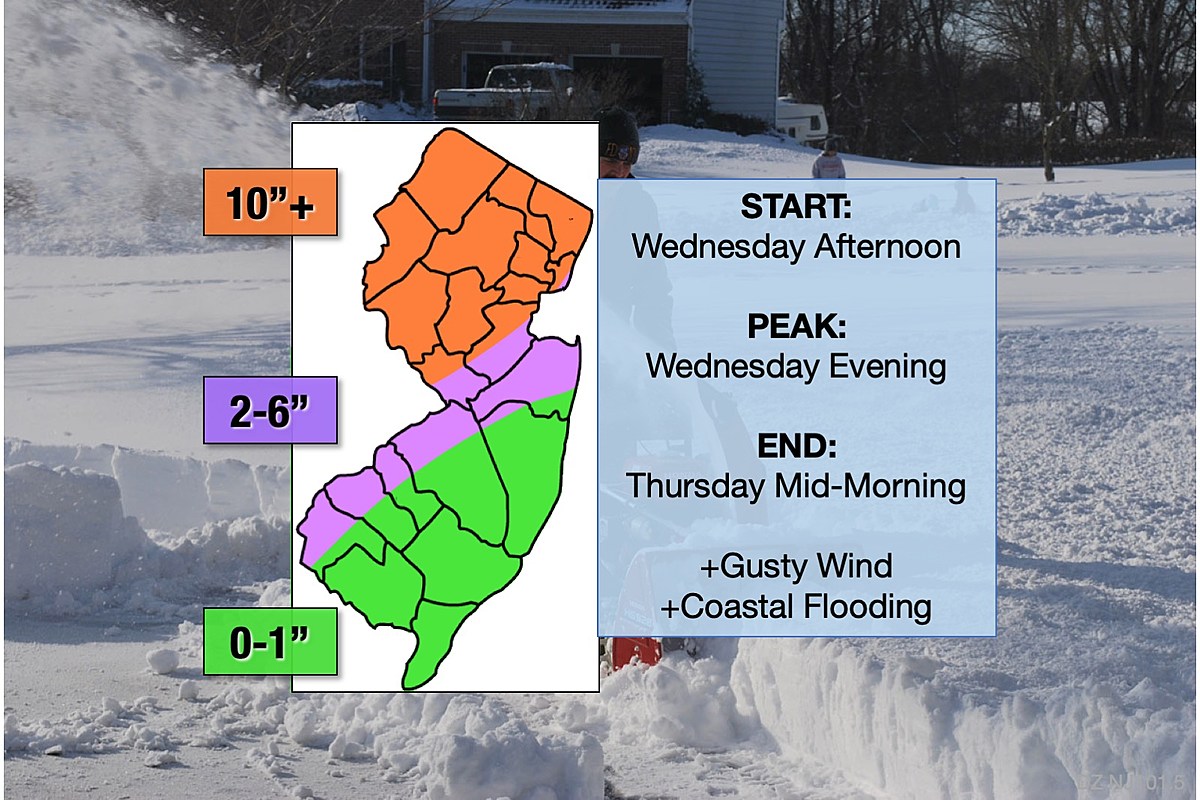 Nearly all forecasting models now show a slight northerly shift in our nor’easter’s storm path, putting the center of low pressure right above Cape May, NJ (rather than over open water to the south and east). That is a remarkable one warmer solution for us, forcing the rain-snow line further north during the peak of the storm Wednesday night.

The wobble is not cause for panic, drop the snow forecast dramatically and / or call it a failure. Yet. It just confirms what I’ve been saying all along: this is a very complicated and track sensitive forecast, subject to adjustments as the storm approaches and wobbles and wobbles. It’s even more “boom or bust” now.

You will find that I have slightly lowered the snow totals on my latest map – a move I fully expected for the southern half of the state. I’m going to look carefully at the trend of the upcoming model cycles, before publishing a final call forecast early Wednesday morning.

It’s going to be a very different storm on both sides of the state. However the numbers turn out, it will still be a nasty storm with very messy weather and road conditions, strong winds and coastal flooding. There will be travel headaches, especially during rush hours on Wednesday evening and Thursday morning. There will be school and business closures. There will be power cuts. There will be flooding of the tidal water.

I’m also worried that weather conditions ahead of the storm will go downhill faster than expected. Wednesday night commute can get very sloppy as the initial type of precipitation will be for most straight snow. And I shifted the timing of the peaks a little earlier, from about 7pm to midnight.

Yes, we still expect cold temperatures, double digit snow totals and significant travel disruptions in the northern half to third of New Jersey. I scaled back snow totals slightly, now 10+ inches instead of 12+. I considered putting an upper limit of 14 “or 16” or even 18 “on that orange outline. But I feel much more comfortable keeping it semi-ambiguous for now, leaning towards the lower end of” double digits “.

However, the shift to the north makes up for it even more unlikely that 20+ inches of snowfall will happen – you’ll remember me never bought into that idea.

I have some concern that the mixing line will drift as far north as the Interstate 78 corridor and wipe out that snow buildup. That’s the biggest factor I’ll be looking at when our final guidance comes in.

The first snow in North Jersey will arrive on Wednesday between approximately 3:00 PM and 5:00 PM. Slushy, icy roads and poor visibility can become a major problem during the evening rush hour. The heaviest snow accumulation – the fastest accumulation – will come a little later, between about 7:00 PM and 1:00 AM. An icy mix of snow, sleet and sleet can creep in during this time. Things will really calm down just before sunrise (6 a.m.) Thursday, with the last flakes falling around 10 a.m.

Expect gusts of wind up to about 35 mph during the height of the storm.

It’s literally impossible to get a “perfect” weather forecast here – locating such snow and ice totals goes beyond current meteorological science. Ladies and gentlemen, this is the “boom of bust” zone, where there is a very tight angle between it significant snow on the ground and hardly anything. I’ve given you my best educated guess here, given our latest forecast information.

The initial fallout from this battlefield zone will probably if snow falls between 1:00 pm and 3:00 pm Snow will continue to fall during the evening commute, with some accumulation, reduced visibility and sloppy road conditions. Then, after about 7pm, an influx of warmer air will cause a transition to rain and / or sleet. Light frosting is an option. And some of that precious snow accumulation from the past will be washed away. At the rear of the storm, a quick fall back to snow is a good bet, after about 3 a.m. The last snowflakes should fall around 9 a.m. on Thursday

Wind gusts of up to about 40 mph are possible at the height of the storm. On Thursday morning, moderate coastal flooding is expected along Raritan Bay, the Atlantic Ocean and back bays and tributaries. Minor coastal flooding can occur along the Delaware River and Delaware Bay.

Well I hope you like rain. Because with temperatures rising well into the 1940s along the Jersey Shore, that’s what you’re going to get.

At the beginning and end of the storm system there will be a narrow window for some winter mix and snow. But snow build-up will be very light, if at all. Between 1 and 2 centimeters of rain is expected.

The first raindrops (and snowflakes) will bubble up from the southwest on Wednesday between 1:00 p.m. and 3:00 p.m. The roads look mainly wet for evening commutes, although there may be some muddy and slippery spots. Heavy rain falls after about 6pm on Wednesday evening, leading to problems with visibility, traction and puddling. There may be some mixing with snow or sleet, especially the further north and west you are. Because the temperatures drop early on Thursday morning, around 3 in the morning, a transition to all snow is possible. (No guarantee, however.) Piling up will be very difficult with such wet soil. The last drops and flakes are expected to leave the coast around 10 a.m. on Thursday.

Gusts of more than 80 km / h are possible as the storm intensity peaks on Wednesday evening, especially along the direct coast. Those fierce winds will drive water towards the Jersey Shore, which amounts to about 2 feet of storm surge. Widespread moderate inundation of tidal waters is likely during Thursday morning’s flood cycles.

Hopefully that gives you an idea of ​​what we stand for at the moment. The next weather blog update will be released early Wednesday morning, around 7am. It will feature our final call for snow totals, timeline and impacts.