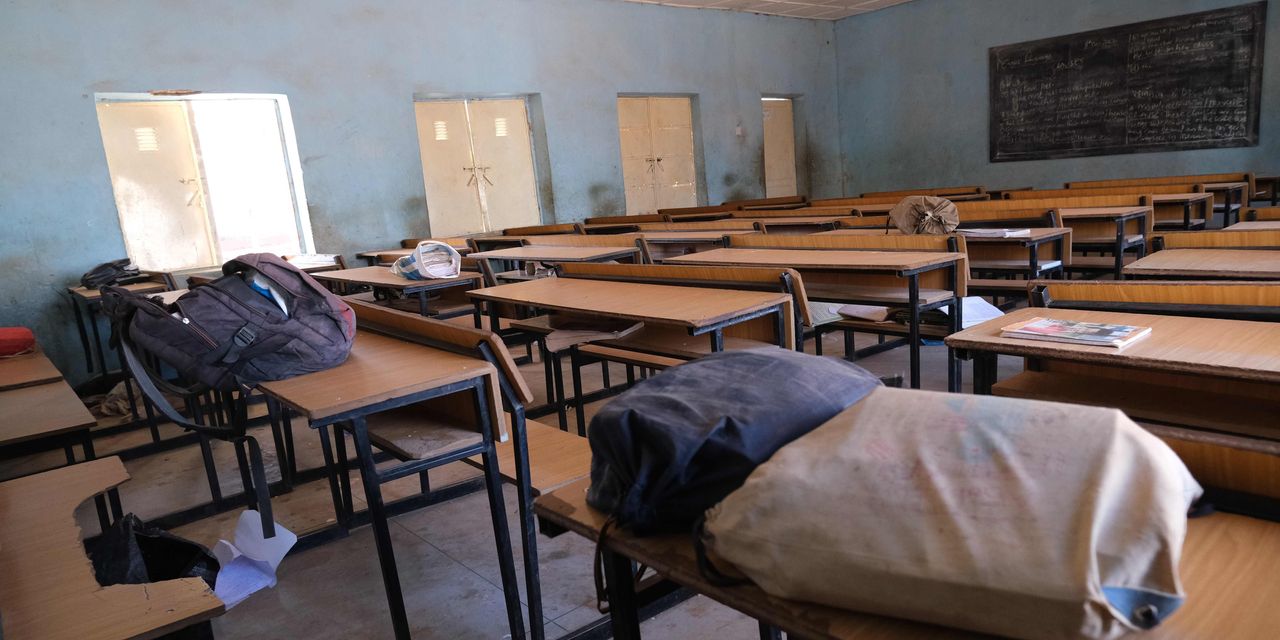 MAIDUGURI, Nigeria – Six years after the kidnapping of 276 schoolgirls triggered the global # BringBackOurGirls campaign, Nigeria is reeling again from a massive kidnapping, this time of more than 300 boys.

Jihadist group Boko Haram said Tuesday it had confiscated students from a boys’ boarding school in Katsina, northwestern Nigeria, to punish them for “un-Islamic practices.” Local officials said 333 of the school’s 800 students were missing and presumed in captivity, a number that analysts say could mark one of the largest mass kidnappings of schoolchildren in history. Nigerian surveillance planes and US drones have been sent over the vast forest, where survivors say the kidnappers forced them to march.

One of the students who escaped the kidnappers – 17-year-old Usama Male – said the kidnapping began just after 10 p.m. on Friday. Dozens of men in military clothes who shot Kalashnikovs into the air poured into the sand-caked school campus and ordered the entire student body to march into the forest. After nearly two days of walking in a hundreds-strong column without food and little water, he was one of the lucky few to escape.

“They said they would kill anyone who tried to flee, but I placed myself in the back and waited for a chance to flee,” he said, next to his father, Aminu, in the city of Kankara. “Hundreds of my fellow students are still in captivity somewhere in the forest.”

“Only in Nigeria have we seen militants walk into a high school and kidnap the entire student body,” said Bulama Bukarti, an analyst at the Tony Blair Institute for Global Change in London. “The security situation in the north is deteriorating rapidly. An attack on the children of Nigeria is an attack on the future of the country. “

Many of the details surrounding the kidnapping, in a remote agricultural area with poor communication, remain unclear, including the true number of missing persons. School authorities said that at least 446 students were now with their parents, but that due to the poor telephone network, they were unable to reach dozens of families to confirm the boys’ safety.

Boko Haram’s claim of responsibility has taken some analysts by surprise and marks a departure from the extremist group’s usual field of operations in the north-east of the country.

“What happened in Katsina was done to promote Islam,” said Abubakar Shekau, the group’s leader and Africa’s most wanted terrorist, with a $ 7 million bounty on his head. “Western education is not the type of education permitted by Allah and His Holy Prophet.”

Shekau did not provide figures on the number of boys kidnapped in Kankara, but the mass kidnapping appears to be even greater than Boko Haram’s 2014 kidnapping of 276 schoolgirls from Chibok city, which sparked the #BringBackOurGirls global campaign and led to a US military intervention. A new hashtag, #BringBackOurBoys, began to evolve in Nigeria as new details trickled out. The United Nations strongly condemned the kidnappings and called for the “immediate and unconditional release” of the children.

Boarding schools in several northern states have been closed and the governor of Katsina appeared on television in tears. The local government has said the kidnappers have been in touch to discuss a ransom to release the boys, although Shekau said there were no negotiations.

Nigerian Defense Minister Salihi Magashi confirmed that a search and rescue operation was underway and promised to do whatever it takes to ensure the boys’ return.

A Nigerian security official said the military has sent surveillance planes over the nearby forests, a vast area of ​​dense canopy spanning four states. The US also flew a reconnaissance plane dispatched from the drone base in Agadez, Niger, to provide intelligence, the official said.

The attack has sparked shock and anger in the largely poor and rural region close to Nigeria’s border with Niger, which has been facing increasing insecurity in recent months. Distraught families have gathered on the school campus for the past few days, begging authorities to save the boys.

On Tuesday it was horribly quiet on campus. The students’ belongings were scattered around the dormitories; textbooks and stray football boots stood next to bags that would soon be packed for the end of the year holidays.

The rising wave of violence in Northern Nigeria comes amid the government’s faltering strategy to combat a decades-long uprising that has spread into one of the world’s deadliest jihadist campaigns.

The attack in Kankara is particularly embarrassing to President Muhammadu Buhari, a resident of Katsina, who has repeatedly claimed that Boko Haram and its affiliates have been technically defeated. But since last year, the militants have been advancing, conquering dozens of smaller military bases and looting weapons. According to the US Council on Foreign Relations, the period since July 2018 has been more deadly to Nigerian security forces personnel than ever in the decade-long conflict.

Boko Haram’s claim of responsibility crosses the northern borders of Africa’s most populous country after two bloody weeks. In late November, the group kidnapped and then massacred about 70 farmers in the village of Zamabari, Borno state. Last week, the group killed 28 people and set fire to 800 houses in a village across the border in southern Niger.

Now, Shekau – Boko Haram’s leader since 2009 – has claimed a much greater prize: a mass kidnapping that could once again draw global attention to a conflict that rarely exceeds media coverage outside Nigeria.

Shekau, who swore allegiance to Islamic State in 2014 and split from the group in 2016 due to theological disputes, has traditionally operated in northeastern Nigeria but has quietly built alliances in the northwest over the past year. Nigerian intelligence analysts say the Boko Haram leader has exploited the deteriorating security situation in the region to rebuild old networks and forge new alliances with criminal groups. In recent video reports, Shekau has claimed that Boko Haram has cells in the northwest and appeared to be addressing potential new recruits in the regional Fulani language.

“The growth in the reach of Islamic State and Al-Qaeda affiliated groups in northwestern Nigeria has prompted Shekau to build combat capability in rural parts of the northwest, co-opt existing bandit groups, and leverage pre-existing contacts in the northwest. region, ”said Fulan Nasrullah, executive director of the Conflict Studies and Analysis Project at the Global Initiative for Civil Stabilization, a Nigerian think tank focused on armed conflict. Mr. Nasrullah, who was an adviser to a Switzerland-led attempt to mediate the talks between Boko Haram and the government, added: “From what we know about the details of the kidnapping, there are many similarities with Chibok’s kidnapping. . “

Shekau directed the kidnapping of the schoolgirls from Chibok Government Secondary School in 2014. After three years, 103 were released in deals struck by a team of Swiss brokers for ransom and exchange of Boko Haram prisoners. A total of 112 have never returned home and many are feared to have died in captivity.

The testimony of the Kankara survivors suggests that the kidnapping was eerily similar to the one in Chibok. Mr. Male and other witnesses said dozens of motorcycle gunmen surrounded the boarding school and opened fire on the police before picking up students and saying they were soldiers – the same technique used in the Chibok kidnapping.

Mr. Male and hundreds of his fellow students were then told to hand in their phones and walk for hours without food or water into the dense forest. “At one point they counted us and we were 520 hostages,” he said.

Another student, who declined to give his name for fear of retaliation, said at least two of the prisoners died during the march.

Mr. Male said he walked barefoot for more than 12 hours because he did not have time to retrieve his sandals during the kidnapping. He was anemic and felt weak and dizzy, but the gunmen said anyone who escaped would be killed. In the dark he saw dozens of students slip out of the crowd and disappear into the woods.

When the militants ordered the group to rest near a village while discussing how not to be seen, he slipped and hid under a tree. He sneaked into the forest and reached a nearby village called Zango, where the locals helped him home after a 36-hour ordeal.

“I thought I would never see my parents again … I hope I will see my friends,” he said.