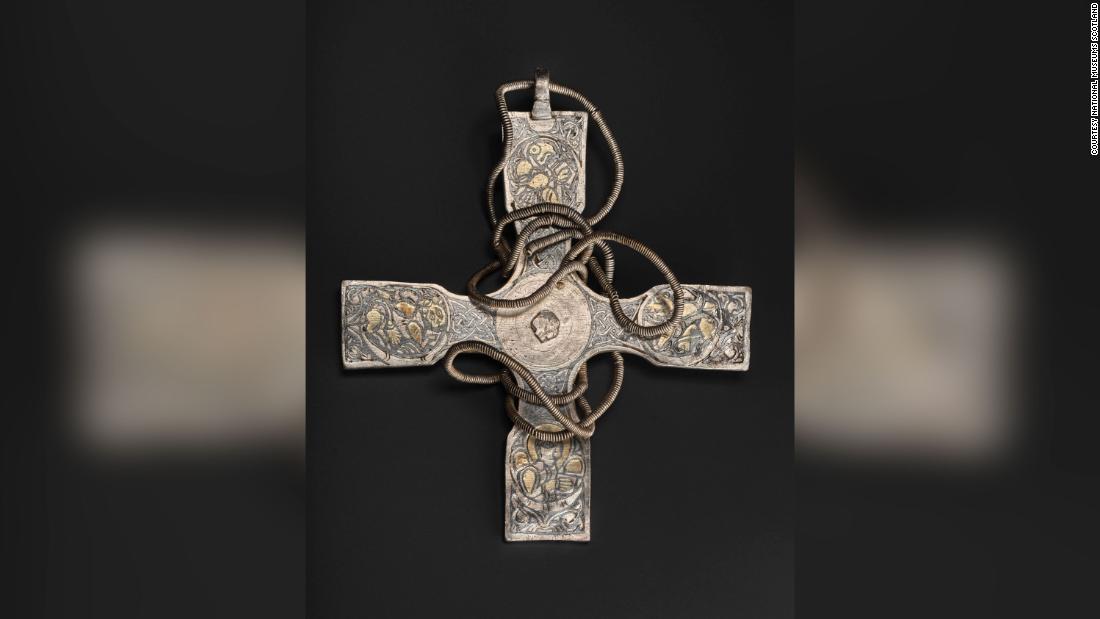 The intricate decoration of an ancient Anglo-Saxon silver cross buried for over a millennium has been revealed for the first time, adding more detail to one of Britain’s most remarkable archaeological finds.

The cross was found as part of the Galloway Hoard, a wealth of treasures discovered by a metal detector in a field in the west of Scotland in 2014.

The cross, decorated with black niello and gold leaf, features engravings depicting each of the Gospels’ writers.

The Galloway Hoard is considered one of the richest and most important Viking artifact finds ever found in the UK. In addition to the cross, there were rare silver bracelets and brooches, a gold ring and a bird-shaped gold pin.

The whole treasure, which was discovered in 2014. Credit: Courtesy of National Museums Scotland

“The pectoral cross, with its subtle decoration of Evangelist symbols and foliage, glittering gold and black inlays, and its delicately coiled chain, is an excellent example of Anglo-Saxon goldsmithing,” Leslie Webster, the former Custodian of Britain, Prehistory and Europe in the British Museum, said in a statement.

The cross was made in Northumbria – what is now Northern England and Southern Scotland – in the 9th century for a high-ranking clergyman, Webster added.

Similar Anglo-Saxon crosses are exceptionally rare, Webster said; the only other known example is from the 9th century, but is much less extensive.

The Galloway Hoard was the subject of a $ 2.5 million lawsuit by the Church of Scotland last year, in which the church claimed it had been entitled to a portion of the treasury since it was discovered on its land.

It was found by retired businessman and detectorist Derek McLennan in a field in the Dumfries and Galloway region of west Scotland.

The cross before it was cleaned. Credit: Courtesy of National Museums Scotland

“At first I didn’t understand what I had found because I thought it was a silver spoon, and then I turned it over and swiped my thumb over it and I saw the Saltire type design and immediately knew it was Viking”, McLennan said. the BBC at the time of the discovery.

The cross, along with other parts of the collection, will be on display in Scotland from February.

“The conservation work allows us to see this object clearly for the first time in over a thousand years, but it also reveals a whole host of new questions,” said Martin Goldberg, the chief curator of early medieval and Viking collections at National Museums Scotland. in a statement.

Detail on one of the arms of the restored cross. Credit: Courtesy of National Museums Scotland

“Was it also precious metal, destined to be melted down into the kinds of ingots with which it was found? We can easily imagine this cross being robbed of a Christian clergyman during a raid on a church – a classic Viking age stereotype.” he said. “But the complexity of this treasure forces us to rethink simple stereotypes.”

The finds are relics from a period when the separate political entities we now know as Scotland, England and Ireland were established, National Museums Scotland said.