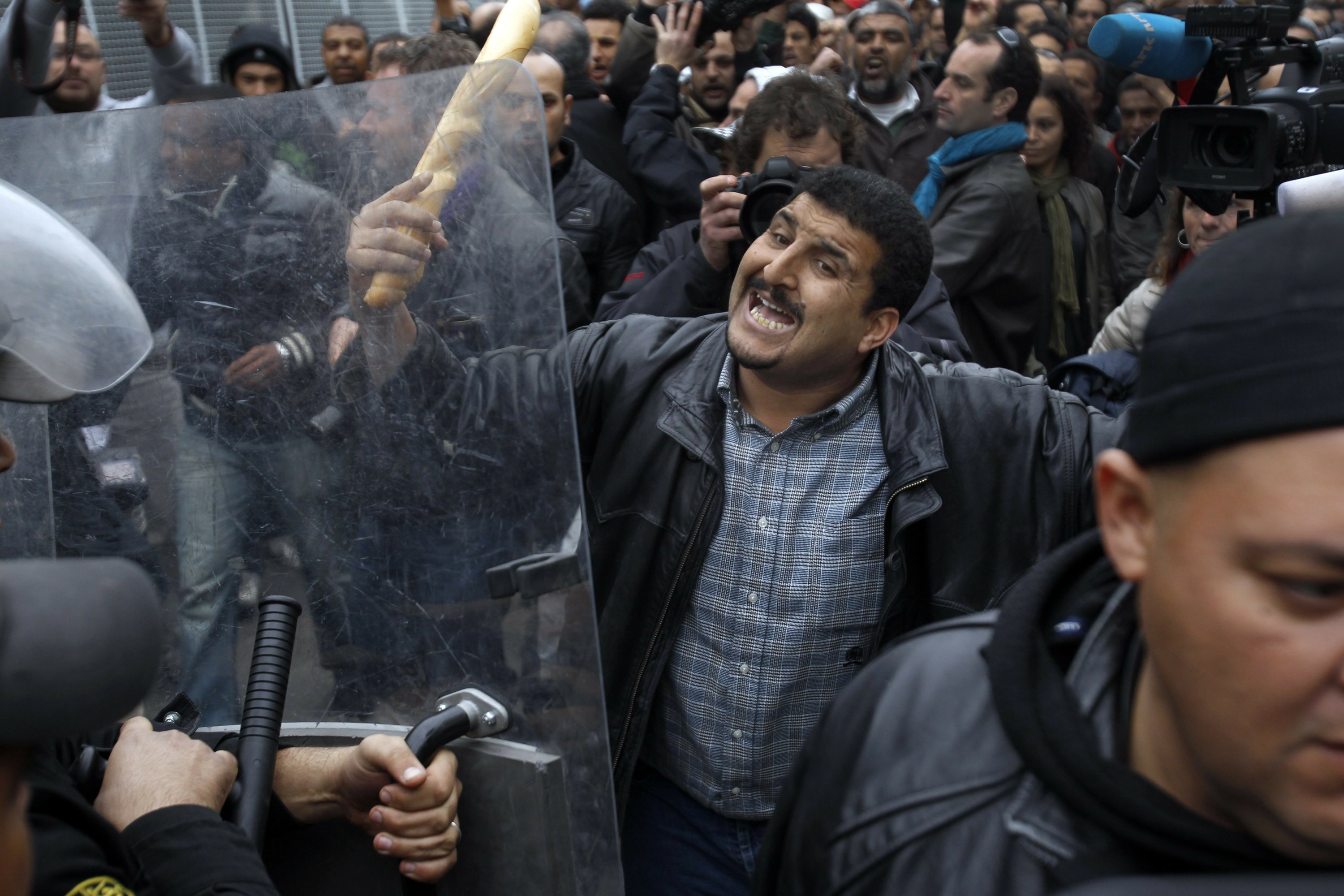 It has all been so completely obliterated that so much blood has been shed and destruction wrought in the last decade. The idea that there was a moment when millions in the Middle East wanted freedom and change so badly that they took to the streets resembles romantic nostalgia.

‘It was very short, man. It was so short, ”said Badr Elbendary, an Egyptian activist.

Elbendary was blinded on the third day of the uprising in his country in 2011 when security forces shot him in the face. It happened during a clash that became iconic among Egypt’s ‘revolutionaries’, when protesters and police fought for hours on a bridge over the Nile in Cairo, ending with the police falling apart.

Today he is in the United States. He cannot return home. Many of his comrades from the protests languish in prisons in Egypt.

In December 2010, the uprising started in Tunisia and quickly spread from country to country in revolts against old authoritarian rulers. It became known as the Arab Spring, but for those who took to the streets, the cry was ‘revolution’.

The uprisings were about more than just removing autocrats. At heart, they were a massive public demand for better governance and economies, the rule of law, more rights, and most importantly, a voice in the way their countries are run.

After 2011, the wave seemed irreversible for a while in those dreams. Now they are further than ever. Those who maintain the faith are convinced that cravings were real – or even growing – as people across the Arab world grapple with deteriorating economies and tougher oppression. Eventually, they say, it will reappear.

“We have lowered our dreams,” said Amani Ballour, a Syrian doctor who ran an underground clinic that treated victims in the opposition enclave of Ghouta outside Damascus, until it collapsed under a protracted, brutal siege by Syrian government forces in 2018. She was evacuated. with other inhabitants to northwestern Syria, and from there she left the country.

“The spirit of the demonstrations may be over for now … But all who have suffered the war, the oppression of the regime, will not bear it,” she said from Germany. “Even in the areas controlled by the regime, people are growing in great frustration and anger.”

Across Syria, Yemen and Iraq, millions have lost their homes to war and are struggling to make a living, raise their children or even feed themselves. In those countries and in Libya, armed factions have grown, raising money and recruiting young people with few other options. Poverty in the region has soared, especially with the coronavirus pandemic.

Activists and analysts have had a decade to think about why things went wrong.

Secular liberals failed to present a cohesive front or leadership. Islamists such as the Muslim Brotherhood have overplayed their hand. Labor organizations, castrated by decades of autocratic rule, could not emerge as a powerful mobilizer or political force. Perhaps it is no coincidence that the countries with some success, Tunisia and Sudan, both experienced strong labor and occupational movements.

The international scene was opposed to the uprisings. The United States and Europe were confused in their responses, torn between their rhetoric about supporting democracy and their interest in stability and concerns about Islamists. In the end, they largely listened to the latter.

Gulf monarchies used oil wealth to stifle any revolutionary tide and push back reactionary powers. Russia, Iran, Turkey and the United Arab Emirates waded into the region’s wars, either sending their own troops or arming factions.

In the end, few expected how widely some leaders were willing to throw open the gates of hell to maintain power.

Syrian Bashar Assad turned out to be the most ruthless. Faced with armed rebellion, he and his Russian and Iranian allies decimated cities, and he used chemical weapons on his own people, venturing back into Syria’s interior and main cities and retaining his rule.

In Yemen, strongman Ali Abdullah Saleh was forced to resign in late 2011 in light of protests. But he soon tried to regain power by alliance with his old enemy, the Iranian-backed Shia Houthi rebels. Together they conquered the capital and northern Yemen and joined Saudi Arabia and other Gulf states in a US-backed campaign to save the government.

The resulting civil war has been catastrophic, killing tens of thousands of people and starving the population in the world’s worst ongoing humanitarian disaster. Saleh himself was killed by the Houthis when they suspected him of turning against them.

In Libya, the US and European countries withdrew from involvement after their bombing helped bring down Moammar Gadhafi. The oil-rich Mediterranean nation promptly plunged into a civil war that was constantly changing its shape. Over the years, the many local militias, units of the old national army, Al-Qaeda, the Islamic State group, Russian mercenaries and Turkey-backed Syrian fighters have been involved, with at least two – at one point three – rival governments. .

Europe’s top priority has been to stop the flow of African migrants from Libya across the Mediterranean. Libya has thus become a gruesome dead end for thousands of men and women trying to migrate from Central and East Africa, only to be imprisoned and tortured by militias.

The civil war in Syria gave the former Iraqi branch of Al-Qaeda, renamed the Islamic State Group, a theater to build strength. From there it engulfed part of Syria and Iraq and announced the creation of an Islamic “caliphate” – opening a new war that caused destruction in Iraq.

In Egypt, President Abdel-Fattah el-Sissi often points to the wreckage in the region to bolster one of his most important claims to legitimacy – “without me, chaos.”

El-Sissi took the lesson from 2011 that even the tiniest gap sets a foothold for unrest, often saying stability is needed as he reshapes the economy. It is an argument that resonates with many Egyptians, shaken not only by wars in Syria and Libya, but also by the unrest in Egypt years after the fall of Hosni Mubarak.

The result is a repression of dissent that goes far beyond what was seen under Mubarak. The destruction of the Muslim Brotherhood and Islamists included a brutal attack on a sit-in that left hundreds dead. In recent years, his government has arrested secular activists and others and often brought them to terrorism courts.

Still, even with much of the region deep in the era of the Counter-Arab Spring, revolts for change are erupting.

In late 2019 and early 2020, massive protests spread across Lebanon and Iraq, with crowds demanding that entire ruling classes be removed.

In Sudan, protesters forced the old autocrat Omar al-Bashir out. Learning a lesson from 2011, they continued to protest and also try to drive the military from power. They were only partially successful.

These uprisings indicate that the ambitions of the first uprisings are still reverberating in the region. But for now, even incremental change often seems too much to hope for.

Rather than real democracy, “my dream before I die is to see less torture, fewer arrests and a real, better economy,” said Ramy Yaacoub, who was involved in the post-revolution protests and politics in Egypt during the intoxicating days after the fall of Mubarak. .

“This is as realistic as I can be.”

“Change does not happen overnight. I don’t want to be totally clumsy and say the French Revolution lasted for decades, but it did. It won’t happen for more than a year or two, ”said Yaacoub, who founded and now directs the Tahrir Institute for Middle East Studies in Washington.

Some activists have turned to improving themselves, studying and developing skills, keeping despair away.

Elbendary has regained partial vision in one eye – although he said it gave him a shock after getting used to blindness. In the years since he left Egypt, he has provided consultancy on community organizing, policy research, independent media development and conflict resolution in the region. A short visit to Egypt in late 2018 and early 2019 made it clear that it was not safe for him to stay.

Now he is struggling with exile in Washington. He still celebrates the rebellion as “my rebirth” in his Twitter bio. The hope lies with a generation gaining knowledge that could one day benefit their homeland.

Highly optimistic for several years, he said – not for real change, “for a small opening, a small margin where we can breathe.”