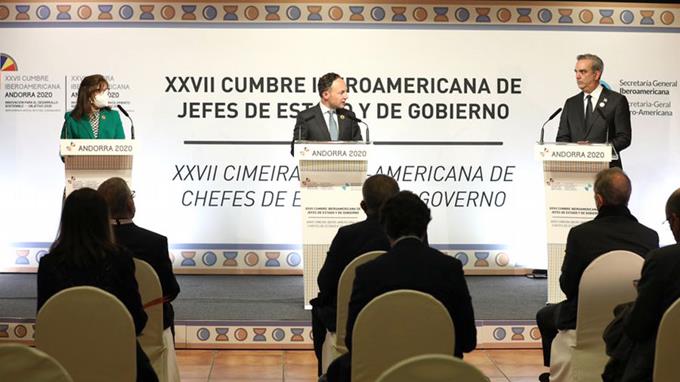 The President of the Dominican Republic, Luis Abinader, yesterday highlighted the need for the international community to coordinate its best efforts to successfully face the massive economic and social challenges posed by the Covid-19 pandemic .

Abinader said that after assuming the pro tempore secretariat of the XXVIII Ibero-American Summit of Heads of State and Government to be held in the country in 2022, the Dominican Republic will work hard to bring about a recovery and a restructuring fund, which is the foundation of a major regional development alliance, and that will facilitate not only the post-pandemic recovery, but also the transition to a new, just, green and sustainable economic order.

At the conclusion of this summit, the President thanked the King of Spain, Felipe VI and the President of the Spanish Government, Pedro Sánchez, for their willingness to send vaccines against Covid-19 to Latin American countries,

He criticized that, despite the need for a renewed multilateral vision, in the distribution of vaccines against Covid-19, the most developed countries have been found to have taken hoarding measures denying access to these vaccines in a deplorable and unfair manner. in low- and middle-income countries, contrary to any idea of ​​human solidarity. Abinader considers it imperative to design governance strategies that guarantee the political and social stability of the region, which in turn should be based on economic policies aimed at fully realizing the 2030 Agenda.

He recalled the reports of the Economic Commission for Latin America (ECLAC), which warn of the serious consequences of severe fiscal imbalances and the ensuing debt burden of the pandemic on the vulnerability and liquidity needs of the region.

The president noted that this will increase funding deficits in the Latin American region.

“Let it be clear. We are not advocating humanitarian aid or charity funds. What we are proposing is an alliance for development that will enable us as a region to move towards a new productive and redistributive model,” he said.

Abinader pointed out the region’s vulnerability and liquidity needs, as indicated by ECLAC. “The region needs new and massive economic resources to bolster the growth prospects, and the developed countries should be called on to step up efforts to channel these capitals, which will enable us to cope with the impact of the pandemic debt burden. to soften and revive our growth. ”, he said.

The president warned that it will only be possible to fully achieve the 2030 Agenda if funding gaps can be closed at the lowest possible cost to developing countries.

He called on the Ibero-American community to avoid another lost decade in the region. And he concluded that it is a great challenge, “but I am sure we will succeed together.”

Abinader assured that the Dominican Republic will be an unshakable ally who will work tirelessly so that, based on our differences and similarities, we “walk together for a just and sustainable Ibero-America”.

On the last day of the Summit yesterday, Abinader held three bilateral meetings where he raised key issues of interest to the country, such as trade, energy and technology.

He met his Guatemalan counterpart, Alejandro Giammattei. He later met with the President of Portugal, Marcelo Rebelo de Sousa, and later spoke with the head of the government of Andorra, Xavier Espot Zamora, who cited the need to establish diplomatic ties, trade, tourism and other areas. expand.

Abinader thanked the authorities of the Principality of Andorra, its President Xavier Espot Zamora and his team, as well as Rebeca Grynspan, General Secretary of SEGIB, for all the support given to the Dominican authorities in the transfer of the headquarters and for the successful realization of it. top.

He pointed to the need to protect human rights and the environment, update democratic political institutions with new technologies, and reorient public spending priorities and the way societies are run.