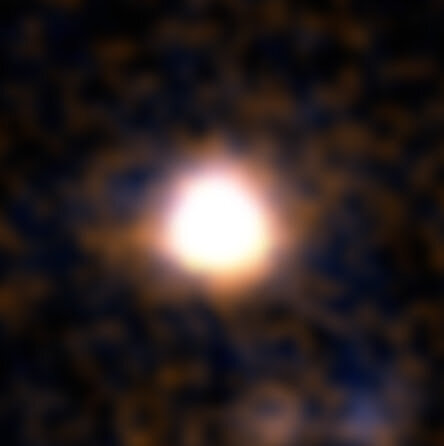 So young and already so evolved, observations from the Large Binocular Telescope enabled an international team of researchers, coordinated by Paolo Saracco of the Istituto Nazionale di Astrofisica (INAF, Italy), to reconstruct the wild evolutionary history of an extremely massive galaxy that existed 12 billion years ago, when the universe was only 1.8 billion years old, less than 13% of its current age. This galaxy, called C1-23152, was formed in just 500 million years, an incredibly short time to create a mass of about 200 billion suns. To do this, it produced a staggering 450 stars per year, more than one per day, a star formation rate nearly 300 times faster than the current speed in the Milky Way. The information gleaned from this study will be of fundamental importance to models of galaxy formation for objects for which it is currently difficult to explain.

The most massive galaxies in the universe reach hundreds of billions of times the mass of the sun, and although numerically they make up only one third of all galaxies, they contain more than 70% of the stars in the universe. For this reason, the rate at which these galaxies formed and the dynamics associated with them are among the most debated questions of modern astrophysics. The current model of galaxy formation – the so-called hierarchical model – predicts that smaller galaxies formed earlier, while more massive systems were later formed by successive mergers of the pre-existing smaller galaxies.

On the other hand, some of the features of the most massive galaxies seen in the local universe, such as the age of their stellar populations, suggest that they formed in the early ages instead. Unfortunately, the variety of evolutionary phenomena that galaxies can undergo during their lifetime does not allow astronomers to define the way they came into being, leaving great uncertainties. However, an answer to these questions may come from the study of the properties of massive galaxies in the early Universe as close as possible to the time when they formed most of their mass.

Seventeen hours of spectroscopic observations of the elliptical galaxy C1-23152 with the Large Binocular Telescope (LBT) allowed Saracco’s team to reconstruct its evolutionary history at a time when the universe was less than 13% of its current age. “The data shows that the formation time of C1-23152, that is, the time elapsed from the formation of the first stars from the pre-existing gas to when star formation almost completely stopped, is less than 500 million years ‘says Paolo Saracco, researcher at INAF in Milan and lead author of the paper published in The Astrophysical Journal. “ Also, based on the data collected with LBT, we were able to determine that in this short period of time, which corresponds to less than four hundredths of the age of the universe, the galaxy has formed a mass equal to about 200 billion stars like the sun, that is, about 450 suns per year. Our galaxy, the Milky Way, now forms no more than two per year, ”adds Danilo Marchesini, professor at Tufts University and second author of the paper. Moreover, the large amount of information gathered enabled the team to quantify the abundance of chemical elements heavier than helium (so-called metallicity) in a galaxy so far away for the first time: the stars of this galaxy have, surprisingly, a higher metallicity. . than that of the sun, similar to that observed in the most massive galaxies in the universe today.

“These observations showed that the formation of the most massive galaxies in the universe can occur extremely quickly, due to an extremely intense star formation process in the early universe, such as at C1-23152,” said Francesco La Barbera, researcher at INAF in Naples. .

It is fundamental to understand whether the scenario describing the formation of C1-23152 is a specific case or whether it is happening for most of the most massive galaxies in the universe, as this is a profound revision of the models for its formation. of galaxies, ”adds Adriana Gargiulo, also a researcher at INAF in Milan and co-author of the study.

The formation of stellar masses as high as before C1-23152 requires both large gas masses to convert into stars and special physical conditions. One possible scenario suggested by the researchers is that massive primeval gas clouds, falling under the effect of gravity in the same region, collide and cause violent and massive star-forming processes. From an observation point of view, the predecessors of the most massive galaxies may therefore be distant galaxies with a very high star-forming speed.

“ To test our hypotheses, the observations we can perform with the next generation of instruments will be decisive, in particular the James Webb Space Telescope (JWST) which will be launched into orbit in late 2021, and the Extremely Large Telescope (ELT), the largest ground-based telescope ever built, with a primary mirror of 39 meters in diameter, which will be operational in 2026, ” concluded Saracco.