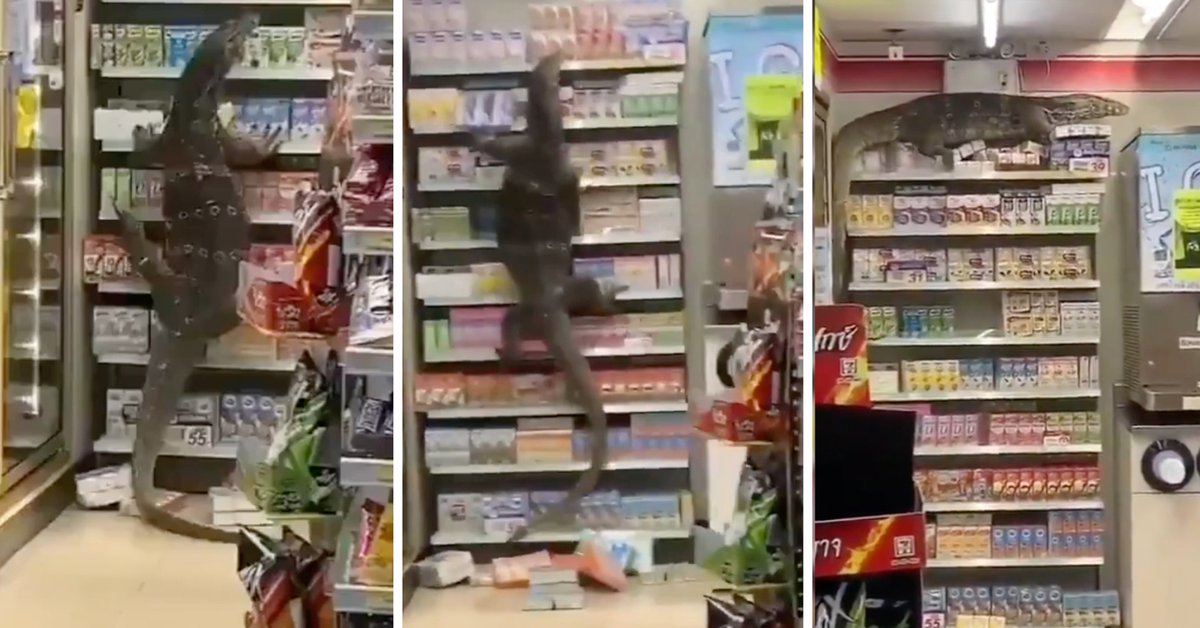 A giant lizard in a supermarket in Thailand (video: Twitter @ DrWildlife)

Diners and workers at a 7-Eleven in Bangkok, Thailand, were surprised to see an animal climbing the store’s shelves. Through a video, which went viral on social networks, you can see that the copy, similar to a lizard, ruins any product it finds in its path.

Thousands of users shared the capsule on different channels, in one of the versions, viewers scream in fear when they see the movements of the Asian water monitor.

“The shelves are falling apart! Oh my God”a voice can be heard over the animal. finally, the clamp it ends with the animal on top of the shelf, by the ceiling, while those present in the background laugh.

About 2.5 meters, the reptile is considered the second largest lizard in the world, after the Komodo dragon. It is an animal with a long muscular body, with a narrow and elongated head. Its tail can be five feet long and uses it to move through water, but also to intimidate potential enemies.

The color is dark brown or blackish and has yellow spots spread over the body, which become less visible over time.

The Asian Water Monitor is a carnivore par excellence and usually feeds on birds and their eggs, small mammals and insects (Photo: EFE / Bernardo Segura)

Its habitat is characterized by humid environments, mainly in mangroves, swamps and wetlands at an altitude of less than 1000 m, but also in rice or palm growing areas and even in cities with canal systems.

Despite its sheer size, these types of reptiles are not a threat to adult humans. However, they are predominantly carnivores and tend to feed on birds and their eggs, small mammals (especially rats, but also monkeys and squirrels), fish, lizards, frogs, snakes, crocodile eggs and young crocodiles, turtles. And sea turtles. , crabs, molluscs, insects, spiders and carrion, as well as human bone debris.

However, not knowing the details about the varanus salvator, Users on social networks were shocked by what was shown in the video. Likewise, other internet users have made the clip an experience by modifying it with songs or other audiovisual elements.

Thailand is characterized by being a country with a wide variety of climates (Image: Reuters / Jiraporn Kuhakan)

And the pandemic caused by the SARS-CoV-2 virus has shown how close humans are to nature. Some of the images that flooded the networks are of unusual appearances of exotic and wild species in highly populated cities. However, when they saw that people did not leave their homes and felt it as a safe place, the specimens took to ‘walking’.

“An Asian water monitor has slipped through a supermarket! The pandemic has affected more people. With tourism slowing down, fewer street vendors are open, meaning that there are few wildlife feeding options in the city, making these times more common. “, the user analyzed @DrWildlife.

“Yes, I think it is an Asian water monitor. They are quite adaptable to urban areas, even a big city like Singapore has them in parks, for example. This one doesn’t seem to have any sunscreen or aspirin, ”commented another netizen humorously.

Although the people who saw the audiovisual piece have drawn their own conclusions about why the visit to a convenience store mostly speculating that he was trying to escape the humid outside temperatures.

A girl singing like Selena Quintanilla surprised social networks with this tender video
Super Grandma: At the age of 88, she goes viral for climbing trees to fetch fruit in the Yucatan
Shaquille O’Neal surprised a man in a jewelry store with a gesture that went viral