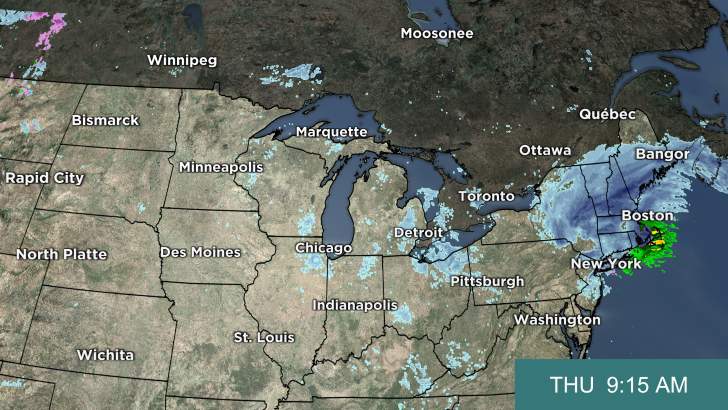 DETROIT – The big nor’easter hammering in New England caused exactly the impact here in southeast Michigan that I expected, with many of us getting about an inch of snow, and some of us between an inch and two.

As for today, I think we will only see occasional gusts or light snow showers, with no impact on our roads. Heights will struggle to reach freezing point (32 degrees – 0 degrees Celsius), with a north wind of 5 to 10 mph.

Thursday night mostly cloudy, with lows in the mid-1920s (-4 degrees Celsius). North-northwest wind at a speed of 2 to 5 mph.

Cloud cover on Friday is a difficult task, because just as a large cloud mass moves out, another one comes closer. So right now I think we’ll start the day mostly cloudy, get mostly cloudy for a few hours, then get mostly cloudy again. Highs go up in the mid 1930’s (2 degrees Celsius).

There is a change to be discussed on the weekend forecast. In recent days I have spoken of a weak cold front crossing the area on Saturday, and it seemed that this front would be progressive (not in the political sense – in meteorological circles in general something ‘progressive’ is moving around the world ). region or country). In other words, it would be traversing the area late on a Saturday or Saturday night and we would be done with it.

However, every front or storm system has a top-level failure and it now shows another Top-level disturbances emanating from the four corners to the west will follow through Oklahoma and then turn northeast towards us, eventually phasing out the top-level system associated with the weak front. This will do two things: slow down the front and increase both the duration and the amount of rainfall.

So I expect a chance of very light rain and / or snow on Saturday, with precipitation now lasting well into Sunday. A big question is the thermal profile of the atmosphere: does it get cold enough at some point to give us accumulating snow?

That’s a very delicate detail that has yet to be considered – one model says yes, another says no. I hope to fix this Friday. Peaks on Saturday should be around 40 degrees (4 to 5 degrees Celsius), and peaks on Sundays in the upper 30s (3 to 4 degrees Celsius).

After a windy and relatively mild day on Festivus (Wednesday), a strong cold front will cut through Festivus night and bring us a windy and cold Christmas Eve day, with a chance of snow showers. Christmas Day itself looks windy and cold, but it should be dry.

Thursday and Friday highs in the upper 20s (-2 degrees Celsius), with temperatures starting Christmas morning in the mid to higher teens (-8 degrees C), with some wind chill as well. Still hoping we can squeeze a white Christmas – it all depends on what happens on Thursday with the lake effect snow tires developing.