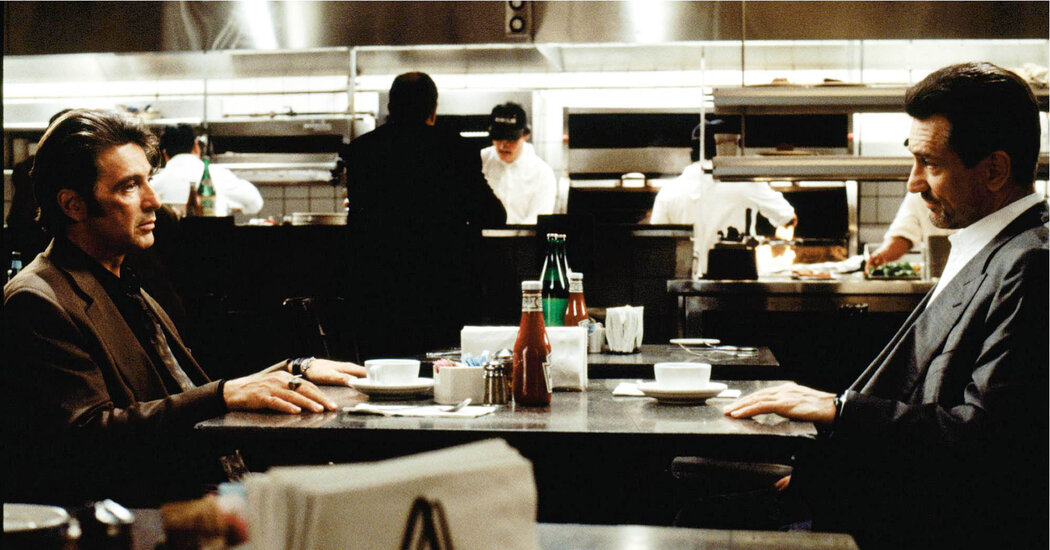 Forty years ago, Michael Mann released his first feature this weekend, “Thief,” which afterwards included several signatures of the director’s work, such as stories revolving around mostly lonely wolves, told with intricate cuts, artful imagery and unexpected musical choices. We asked eleven writers to watch a career full of memorable films and pick out the scenes that still stick with it.

‘Heat’: The Job is the Thing

In most Michael Mann movies, a lot of the action is talked about: men in particular talk, sometimes with women, but mostly with other men, about their work. The frequency of such conversations makes “Heat” (1995) the quintessential Michael Mann movie. The justly famous dinner scene is, in this context, the Michael Mann-est six minutes across the whole cinema.

In the course of a frantic, epic cat-and-mouse game, a tired and exhausted Los Angeles cop, Vincent Hanna, sits down for coffee with Neil McCauley, the criminal mastermind whose plans he tries to foil. They are mortal rivals, but also two boys who grapple with the existential demands of professionalism. They talk about marriage, about work, and while they don’t exactly become friends, there is no real animosity between them. Each recognizes that the other is good at what they do, maybe even the best. Of course they are: it’s Al Pacino and Robert De Niro, sharing the screen for the first time. ALSO SCOTT

‘Collateral’: A Face in the Crowd

Mann has always been adept at luring threats out of the familiar hustle and bustle of public spaces, and the opening shot of this stylish genre thriller (2004) is a good example. As Tom Cruise’s character, a grim assassin, slowly emerges from the crowd at a Los Angeles airport and approaches the camera, his deliberate stride intentionally gets out of step with the sea of ​​travelers around him. Silver-haired and expressionless behind jet-black hues, he glides through the terminal, with his light gray sharply tailored suit and dazzling white shirt radiating a faint glow. The shark metaphor is not subtle, but still perfect: in just 30 seconds of screen time, and before we heard him say a word, we know this man is a predator. JEANNETTE CATSOULIS

Mann is such a distinctive stylist, with such a recognizable visual and auditory aesthetic, it’s easy to overlook how deftly he directs his actors. For proof, look no further than Pacino’s big scene in ‘The Insider’. By the late 1990s, after his Oscar win for his roaring spin in “Scent of a Woman,” audiences expected Pacino to work at high volume and high intensity. Instead, Mann keeps the actor on the backburner – until this scene, in which Pacino’s “60 Minutes” producer, who is working on an investigation into Big Tobacco, finally has had enough. Mann and Pacino beautifully build the explosion we’re waiting for, with the director modifying the escalation as a symphonic conductor, while the actor slowly but surely pulls off his bosses, only to let his closest associate take the wind out of his sails. JASON BAILEY

In “Thief” (1981), James Caan is Frank, an artisan safe cracker in Chicago. He knows that living outside of the law means living on borrowed time. After showing up late for a date with Jesse (Tuesday Weld), he becomes angry with her and himself and drives them to a restaurant. The screams subside, but the emotional register becomes even more surprising. Mann chooses simple shots of two people in a box, all but strangers to each other, who suddenly deal with total candor and vulnerability. “My life is very normal”, Jesse protests. Then Frank explains his past, present and what he hopes will be his ideal and perhaps ordinary future – with her. Just like that. GLENN KENNY

A masterclass in visual storytelling, the 10-minute opening scene of the 2001 biopic ‘Ali’, starring Will Smith, sees the boxer as the Louisville Lip, ironically silent as he trains for his 1964 heavyweight bout with Sonny Liston For this kinetic salvo, Mann cuts between a raw Sam Cooke club performance, a Malcolm X speech and the boxer’s encounter with his rival and a trainer (Jamie Foxx). This all comes together with Ali’s intense training and his memories of his childhood in Jim Crow South: the colored part of a bus and Emmett Till’s face on the front page of a newspaper. Mann’s evocative study of Ali’s inwardness perfectly introduces the impressionable man rather than the invincible pop culture icon he would become. ROBERT DANIELS

‘The Last of the Mohicans’: The World in a Gaze

Mann’s great romance with cinema began when he saw the 1936 “The Last of the Mohicans” in a church basement when he was 4 years old. For Mann, James Fenimore Cooper’s story was a “ war zone love story, ” personified in Daniel Day-Lewis’ Hawkeye, who fights to protect both his adopted birth family and his future with Madeleine Stowe’s British émigré Cora. Cerebral stuff, but Mann communicates the powerful ideas of the 1992 movie through eye contact. The first recognition of the characters’ appeal is a staring contest that spans 40 seconds as the music tiptoes into the shadows. While “I’ll find you!” became the meme, this moment takes hold of the child in Mann, who was once that grateful boy who just knew he liked what he saw. AMY NICHOLSON

‘Public Enemies’: A Career With Benefits

Mann’s 2009 gangster movie, “Public Enemies,” is a 1930s Ford with a brand new engine. His predilection for mixing classic melodramatic impulses with new video technology is noticeable when John Dillinger (Johnny Depp) and Billie Frechette (Marion Cotillard) get to know each other over dinner. She looks out of place at the fancy restaurant in her “three dollar dress” and asks what he does for a living, and he tells her soberly, “I’m robbing banks.” Depp and Cotillard play the scene with Old Hollywood glamor, but Mann’s digital eye (featuring the cameraman Dante Spinotti) gives the meet-cute a modern electricity. The director captures precise details in their expressions and focuses on the candor of Dillinger’s admission and the spell of Frechette’s swoon. Here, Mann shakes up a genre like a good cocktail. KYLE TURNER

Cursed by a chaotic production history, “The Keep” (1983) has grown into a trippy, fascinating curio. As with most of my most beloved Mann scenes, my favorite in that movie is not one of his acclaimed set pieces, but a quieter, almost silent segment. In it, madness takes over a Romanian village after Nazi soldiers unwittingly liberate the evil entity that resided in an ancient fortress. A priest drinks his dog’s blood, a white horse roams the deserted streets, sheets flutter on a clothesline. It’s eerily quiet. This is Mann in Werner Herzog’s territory, to a Tangerine Dream soundtrack that answers Popol Vuh’s music for “Aguirre, the Wrath of God” and “Nosferatu the Vampyre.” ELISABETH VINCENTELLI

‘The Last of the Mohicans’: An Emotional Conclusion

There is a lot of love for “The Last of the Mohicans” (not least the way Daniel Day-Lewis pronounces “Kentucky”), but I certainly watched it in full several times to get to the end. The last seven minutes of the film, almost completely dialogue-free, must be one of Mann’s greatest sequences. Call it a music video that serves as a finale, if you will, but the combination of movement and emotion, human grief and natural grandeur, all held together by one of the best movie scores of the 1990s, makes it undeniable. GILBERT CRUZ

‘Collateral’: Suspense in Light and Shadow

A reliable trendsetter, Mann has often played with the very latest technology, when “Collateral” used new high-definition video to capture the cascading qualities of light in a Los Angeles nighttime scene. In the finale, Cruise’s visiting assassin trying to kill a prosecutor (Jada Pinkett Smith) in a downtown skyscraper cuts off the power and chases her through a law library lit by almost nothing more than the vast expanse, indifferent cityscape beyond. Tension becomes a matter of pure light and shadow, as the silhouette of a wandering killer becomes difficult to distinguish from dancing architectural reflections in glass. The scene has perhaps the most inspired use of mirroring since ‘The Lady From Shanghai’. BEN KENIGSBERG

Blurry white dots over black. Maybe stars in space. A golf ball picker passes by, the lights cast a strange glow. It is night on the driving range, where a lonely Jeffrey Wigand (Russell Crowe) is relaxing with a bucket of balls. But a slow pan reveals another golfer in the distance. The metal clatter of his club makes Wigand nervous. A close-up like a golf ball floating in the net. The spotlight went out. Long shadows, aquamarine tones and an opera score. Has our insider been followed, or is the spooky scene evidence of his paranoia? NATALIA SHOP MAN

Where to watch it: “Thief” is available on HBO Max. “Ali”, “Collateral”, “The Keep”, “Heat”, “The Insider”, “The Last of the Mohicans” and “Public Enemies” are available to rent or own on major platforms.