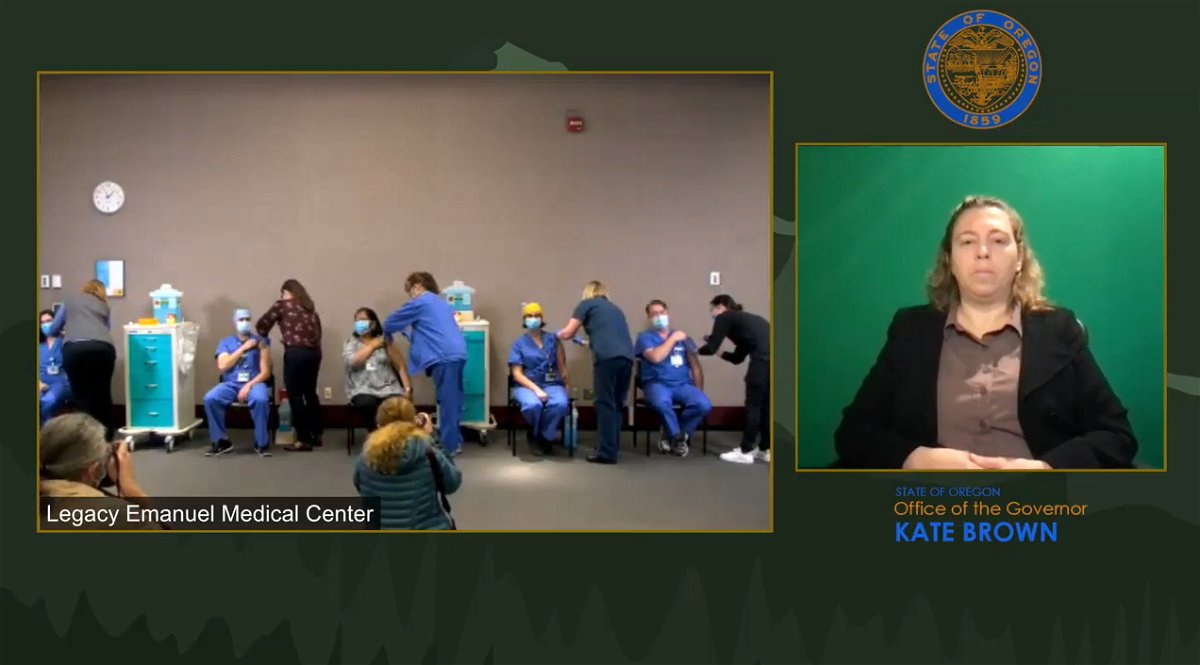 PORTLAND, Ore. (KTVZ) – With a “3, 2, 1 – go!” And a light round of applause after that, four health workers at Legacy Emanuel Medical Center in Portland on Wednesday became the first Oregonians to receive the Pfizer COVID-19 vaccine, which Governor Brown called “ truly the moment we’ve all been waiting for. ”

“The delivery of a safe and effective COVID vaccine gives us all an overwhelming sense of hope and promise,” said Brown.

Myra Gomez, a registered nurse in Legacy Emanuel’s ICU, said she was “taking the vaccine for my family and also for my community,” noting that the virus has disproportionately affected Hispanics and other colored communities.

“And I want to lead by example,” Gomez said.

Oregon Health Authority director Patrick Allen said Oregon still has the fourth lowest number of cases in the nation and one of the lowest death rates because of the early steps that Brown and the OHA took to minimize its spread .

Like others, Allen also said the Pfizer vaccine is safe and effective as it is distributed following “one of the largest and most rigorous trials of a vaccine ever developed,” involving more than 40,000 people from all walks of life and “no serious security”. concerns ”arise.

Allen noted that about a third of the subjects had a fever or chills and others had a headache, muscle pain, or fatigue. “That’s why we’re so careful about planning” for its use, Allen said, adding that those effects are actually a good sign. “It means it stimulates the body’s natural immune response. It means it works.”

Allen explained the three phases the nation is following in the rollout of the vaccine, and the three sub-phases in phase 1, starting with health professionals who maintain hospital capacity and who are most exposed to patients, who could spread the virus . This varies from ambulance personnel and nurses to home care personnel, technicians / technologists and even clerks and laundries.

The OHA official said the federal government has promised about 200,000 doses in Oregon this month, and with 300,000 to 400,000 primary care health workers and the need for two doses three weeks apart, that won’t be enough for everyone.

In fact, only about 5,800 initial doses are currently being distributed to four health care systems with the necessary ultra-cold storage. (St. Charles Health System has said it expects 975 doses on Thursday and will begin staff vaccinations early next week.)

“We’ll get through January at the earliest, possibly later,” Allen said.

But he also noted that the number of cases that peaked a few weeks ago has been flattened in recent days as “Oregonians have made enormous sacrifices” that must continue until vaccines are widely available and there is “community immunity.”

Allen said the Moderna vaccine and the fact that it doesn’t require ultra-cold storage like the Pfizer vaccine is critical to the logistics of distributing the vaccine in more rural areas.

By the end of the online vaccinations / press conference, some of those who had taken the shots were back in front of the camera to share how they were doing so far.

“I just got the vaccine, complete with a Bugs Bunny-Looney Tunes bandage, and don’t feel any ill effects at all,” said Jeremy Howard of Legacy Emanuel. “It was easy, like the flu vaccine.”

(Salem, OR) – Governor Kate Brown today held a press conference to commemorate the administration of the first COVID-19 vaccinations in Oregon to primary care health workers. The governor was joined by Patrick Allen, director of the Oregon Health Authority (OHA), as well as primary care health professionals and representatives from Legacy Health and Oregon Health & Science University in Portland, as well as the Saint Alphonsus Medical Center in Ontario.

“This is the moment we’ve all been waiting for,” said Governor Brown. “We are kicking off this historic vaccination campaign in Oregon with our health workers, who have been our first line of defense against COVID-19. Today they received the first vaccinations in our state. These heroes have put everything they have into this fight. health workers, we thank you.

“With these vaccinations, we can finally begin the long, steady process of turning the tide of the pandemic. But until we can reach a community level of immunity, we must all stay on track and continue to apply the safety measures we know are to influence and stop the spread of this virus. I am so grateful to the majority of Oregonians for following the recommendations of our public health experts by physically distancing themselves, wearing a mask, and restricting meetings. “

More information about vaccines is available at covidvaccine.oregon.gov.

A copy of the Governor’s comments is available here.

A recording of today’s live-streamed press conference is available here.